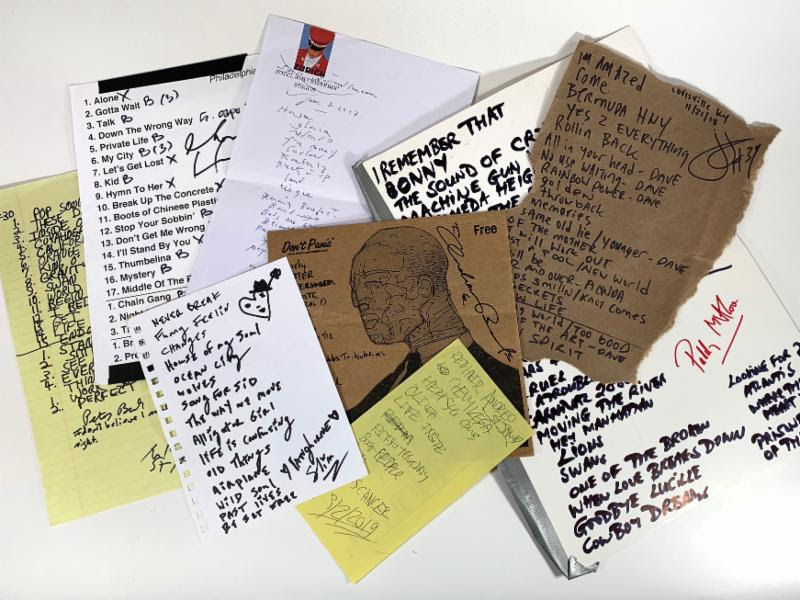 100+ setlists from renowned musicians will go to auction online to benefit international youth writing and activism centers and organizations on behalf of Setlists For Young Voices. Setlists For Young Voices is a new initiative developed and launched by Nick Hornby (novelist, screenwriter, co-founder of Ministry of Stories, a London-based youth writing center), with the help of Dave Eggers (novelist, co-founder of San Francisco youth writing center 826 Valencia), and Michael Chabon (novelist, screenwriter). The auction, starts tonight April 22nd at 7 pm PT / 10 pm ET and will end in ten days on May 2nd. Auction and all setlists can be found here: www.youthwriting.org/bid

Setlists include two from R.E.M.’s first major tour in 1989 and signed by all four original members, five hand-written setlists by Patti Smith, Death Cab For Cutie’s setlist from the 15th anniversary of Transatlanticism where they played the album in its entirety in Chicago, three setlists from Rush’s 2013 Clockwork Angels tour (the band’s penultimate tour), a Peter Townsend-signed setlist from The Who, a setlist from My Morning Jacket frontman Jim James (who is helping launch a Young Authors Greenhouse in his hometown of Louisville, KY), a Coachella 2019 setlist from Janelle Monae, and many more from the likes of Wilco, Sigur Ros, Steely Dan, Dixie Chicks, Nine Inch Nails, Mitski, Rush, Jim James, Toro Y Moi, Maxwell, The Pretenders, Shakey Graves, Better Oblivion Community Center and more.

Setlists For Young Voices is the brainchild of novelist, screenwriter, and music lover Nick Hornby. “One of my friends used to stand at the front of the show so he could read the setlist and call out the name of the next song. It really used to annoy the band,” Hornby says. “So this is a way to satisfy your music-geek side without aggravating your favorite musicians.” Hornby called on fellow novelists Dave Eggers and Michael Chabon to partner with him, and Setlists for Young Voices was born. “We’re hoping to raise about $50,000,” says Eggers. “That will have a powerful impact on more than 150 student writers at the Ministry of Stories and writing centers worldwide.”