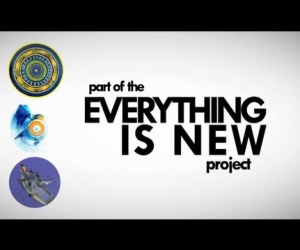 Sun Choir by Edinburgh-based band Marram is an exuberant celebration of global community and cross-cultural friendship. It features collaborations by renowned musical personalities from around the world, including Jarvis Cocker, Owen Pallett, doseone, Irvine Welsh, Margaret Bennett and White Hinterland, singing alongside the Light of Love Children’s Choir. Recorded over 6 years in 3 different continents, it is the Sagrada Familia of post-rave, orchestral art pop. Each track displays a towering symphonic ambition, featuring the voices of the Light of Love Children’s Choir among 200 instruments, including full orchestras and 1000-voice choirs.

05. With Us Instead (feat. Owen Pallett)

11. Falling From The Sun (feat. Jarvis Cocker and Margaret Bennett)

09. Music Will Change The World — Matthewdavid

13. Those Mountains Are God’s Teeth — Califone

More about The Everything is New Project

The Everything is New Project grew from a dialogue between the artists of the Scottish-based arts collective Transgressive North (TN), and the charity, Scottish Love in Action (SLA), both of which are based in Edinburgh. In 2006 Transgressive North member Jenny Chambers had visited the SLA-funded Light of Love Children’s Home in Tuni (Andhra Pradesh, southeast India) whilst still at school, and found it an intensely positive institution deserving serious engagement and investment. Jenny convinced artists in the Transgressive North to enter a dialogue with SLA and collectively, the TN found they were deeply compelled by the plight of Dalit “untouchable” children. The notion of “untouchability” – that some children might be told they were less valuable than others – inspired the TN to develop the Everything is New Project as a vehicle to empower and support the children of the Light of Love Children’s Home. The founding idea was to use the cultural forms which the children themselves found the most meaningful – popular music and cinema – to build funds and awareness in a project in which the children would participate. The project would attempt to counter any inherited preconceptions the children might have about their own value and legitimacy by giving them the opportunity to “star” in music and film works specifically designed to celebrate and empower their identities and means of expression.

The Everything is New project embodies the sum of 7 years of work, over several continents, with over 1,000 contributors, all working for free.