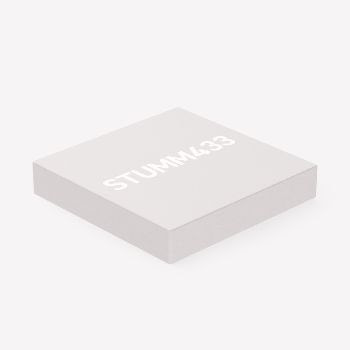 MUTE Records forthcoming STUMM433 box set, will arrive on October 4. Additionally, The Normal aka Daniel Miller – the artist that started Mute back in 1978 with the 7” single “T.V.O.D.” / “Warm Leatherette” – has today shared his tribute to John Cage’s 4’33” which will be available in the box set. The first music released by The Normal on Mute since the debut 7”, Miller recorded his piece at a site in North London that will be familiar to fans of the label as the site of its foundation: 16 Decoy Avenue.

Net profits from the release of STUMM433 will be split between the British Tinnitus Association and Music Minds Matter. These charities were chosen to honor Inspiral Carpets’ founding member Craig Gill who suffered from anxiety and depression as a result of his tinnitus in the years up to his untimely death.

STUMM433 is a limited box set edition of 433 copies that are signed by Daniel Miller as well as CD (both 5-piece collections, exclusive to Mute Bank) and digital formats. It features over 50 Mute artists including Yann Tiersen, Goldfrapp, Depeche Mode, Liars, Silicon Teens, Erasure, K Á R Y Y N, Irmin Schmidt and many more presenting their own interpretation of one piece of music: John Cage’s game changing composition, 4’33”.

Each artist has created a visual to accompany their performance and a selection of 28 designers associated with Mute have contributed artwork inspired by 4’33”. Contributing designers include Simone Grant who worked with Miller on a lot of the early Mute artwork (The Normal, Fad Gadget and Depeche Mode); Steve Claydon, a member of Add N To (X) who designed for Goldfrapp; Slim Smith, who worked with Mute through the 1980s and 1990s; Malcolm Garrett, who designed the House of Illustrious box set for Vince Clarke and Martyn Ware; Tom Hingston, who has worked with Erasure and created the majority of Nick Cave & The Bad Seeds and Grinderman artwork since the early 2000s; and Anton Corbjin, who has worked closely with Mute on many campaigns since the early 1980s, including those of Depeche Mode, Nick Cave & The Bad Seeds and Fad Gadget. Watch Laibach’s visual contribution here.

The vinyl box set will include a set of candles designed by award-winning perfumer Joseph Quartana of Six Scents Parfums as an interpretation of 4’33”. Quartana imagined the a flash of lightning in an old wooden theatre as metaphor for the lingering afterglow of a concert performance in order to answer the question: what is the scent of silence? The CD box set will feature five CDs with a 40+-page booklet packaged in a two-piece card box.

Daniel Miller explains, “John Cage’s 4’33” has been present in my musical life for as long as I can remember as an important and inspiring composition. When the idea of every Mute artist doing their own interpretation of the piece came up during a conversation with Simon Fisher Turner, I immediately thought this was the perfect way to mark the label’s MUTE 4.0 (1978 > TOMORROW) series.”

Mute and Thames & Hudson recently worked together on Mute: A Visual Document, a visual history of the label. One of Uncut and Rough Trade’s Books of the Year, it was described by the record store as “beautifully bound, this book is as iconic and dynamic as Mute’s musical past.”

Future Sound Systems (whose previous modules include The Gristleizer, created in collaboration with Chris Carter from Throbbing Gristle and the original designer, Roy Gwinn) have worked together with Daniel Miller to create the STUMM and MAKROW modules. MAKROW, described as “your system’s steering wheel” and STUMM, a six-channel bank of high-fidelity audio mutes, are both designed for live performance. Daniel Miller explains, “when I was developing my own systems at home, there were things that I felt would help my system but I couldn’t find them.”

MUTE 4.0 (1978 > TOMORROW) acknowledges the launch of a label that started out of necessity rather than design (to release the 7” single by The Normal, “T.V.O.D.” / “Warm Leatherette,” recorded by Daniel Miller on a KORG 700S keyboard with a TEAC four-track recorder), and marks the past four decades, but crucially, looks forward to the label’s many years to come as it travels unapologetically into tomorrow.

Around one in ten people experience tinnitus, the sensation of sound in the head or ears when there is no corresponding external sound. This means for people with tinnitus, silence is elusive, and for some, impossible.

The British Tinnitus Association is the only national charity solely dedicated to the tinnitus community. Our vision is a world where no one suffers from tinnitus. We provide information, support and research funds to make this vision a reality.

Help Musicians is an independent charity with an extraordinary history. For nearly 100 years, the charity has provided a broad spectrum of help, support and opportunities to empower musicians of all ages, at any stage of their career, from times of great need to times of opportunity, providing a lifetime of support when it is needed most.

The charity is uniquely placed to take a personalized approach with each individual supported through its integrated program that offers creative development and health and welfare services.

In 2018, Help Musicians saw a 67% increase in demand for its services across both creative development and health and welfare. The need among musicians is bigger than ever before and this trend is set to continue. Help Musicians aims to make a meaningful difference to the lives of even more musicians by growing reach and becoming even more national in the coming years.

The charity can do more through collaboration and builds strong relationships within the music industry, the health sector and beyond to promote and advocate for musicians’ wellbeing, mental health, hearing health, career progression and more.

With a research-led approach, Help Musicians shares insights, knowledge, resources and best practice, while developing preventative support and initiatives to sustain careers and ultimately improve working conditions for musicians across the sector. The charity is passionate about a world where musicians thrive.