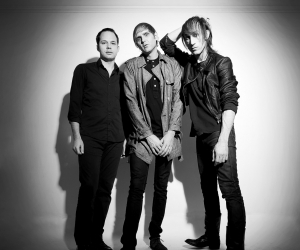 Metropolis Records has announced the release of the upcoming full-length from Moving Units. Hitting stores on September 10, 2013, Neurotic Exotic marks founder Blake Miller’s return after exploring the world as a DJ and collaborating with a myriad of artists. While staying true to the Moving Units “get up and dance” sound, the ten-track LP is more realized through Miller’s growth as an artist and musician through his life experiences. See below as the band hits the road on a national tour beginning this fall. More dates to be announced shortly. Additionally, to celebrate the release Moving Units are giving listeners a sample above.

The tone is set from the title of the first song: Attack Everything. There is no time to hesitate and nothing is left behind. It is a 40-minute blitzkrieg of searing sexy guitar riffs, propulsive synthesizer riffs, and urgent drums fit to detonate any dance floor. Think a long-lost album of Italo-disco covers of Sonic Youth songs and you begin to get close. When you stop moving, there is something to hold onto. In essence: the attack never stops.

05 Everybody Loves A Star

09 The World Is Ours

10 Dark Side of the Room