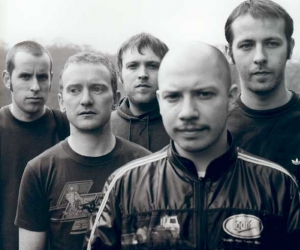 Mogwai will release Rave Tapes, their 8th studio album in 19 years, on CD/LP/DL January 20th in Europe via Rock Action and January 21st in North America via Sub Pop. The record will also be available via Spunk in Australia and Hostess in Japan and SE Asia. The album features 10 tracks and was produced by the band with returning associate Paul Savage (Mogwai’s Young Team; Delgados, Arab Strap). You can now hear “Remurdered,” the leadoff track from Rave Tapes, via Soundcloud/YouTube.

Mogwai has scheduled a short European tour in late January of 2014, including a two-night stand January 24th and 25th in London, UK at Royal Festival Hall and All Tomorrow’s Parties “End of An Era” edition on December 1st.

In related news, Mogwai recently soundtracked the French supernatural thriller, Les Revanants, the most popular TV series in Canal + history. The show has since aired in the UK and will now make its stateside debut as The Returned on The Sundance Channel beginning October 31st at 9pm ET (more info here).

About Mogwai’s Rave Tapes:
Rave Tapes is the eighth studio album by Mogwai and their second on Rock Action, the label they set up almost 18 years ago to issue their debut 7in single, Tuner/Lower. In between, the Scottish quintet have established themselves on the international stage through a prolific recorded output and a commitment to touring that few of their peers can match.

Clocking in at just under 50 minutes, the 10-track album is a lustrous collection mined from the same quarry as its predecessors, wreathed in painterly textures underpinned by increasingly electronic beats. The haunted strains of Deesh channel the slow-burning ecstasy of their 2006 song Auto Rock (a key presence in the denouement of Michael Mann’s film of Miami Vice that year) while the guitars on which Mogwai built their reputation remain, if for the most part less overtly belligerent this time round, as evidenced by the somnambulant opener Heard About You Last Night and the sonic scowl of Hexon Bogon. With Rave Tapes, Mogwai’s mastery of sound and space is firmly at its apex.