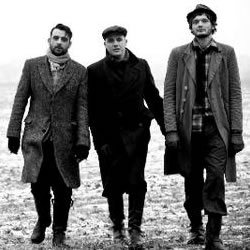 Moderat are Apparat (Sascha Ring) and Modeselektor (Gernot Bronsert and Sebastian Szary). Seducers and hooligans, ponderers and party monsters. They leave no page unturned in their electronic and analogue lives. On one side, there is the thoughtful sound tinkerer and pop poet, and on the other, the techno b-boys. Both acts represent the Berlin electronic scene from the other side of the straight bass drum. Modeselektor are grand masters of subterranean bass and electrifying breakbeats. Apparat is the purveyor of sophisticated electronic pop music. The refusal to be satisfied with what is available forms the bond of an artistic friendship that has lasted more then a decade. The fact that their individual projects are so absorbing precluded the possibility of a continuous collaboration. As a result, in all this time, the trio has come together merely three times – but in decisive phases of their careers. The first time was at the beginning of 2003 when they created the “Auf Kosten der Gesundheit” EP. Then, in 2008 they returned to the studio for their first album and defined the Moderat sound. Throbbing bass and tricky beats on the one hand, Apparat’s delicate vocals on the other. It was this extreme contrast that created the unique Moderat vibe.

Five years have passed and all three find themselves in a new situation: they assume new responsibilities as bandleader (Apparat) and as label makers and dads (Modeselektor). The spectrum is an emotional one, and one that has increased stylistically. There is no longer a prevailing tone.

In the space of eleven tracks, Moderat presents a very varied but tale with II. Its first single, “Bad Kingdom,” will be released digitally and as a 10″ through http://moderat.fm.category/store on July 9th. It is perhaps the most universal song Apparat and Modeselektor have ever produced: a pop song full of passion and energy, lacking contradiction and speaking a universal language. Watch its video, directed by Pfadfinderei, below. It is set in and around London in the year 1966 and features a descendant of the English aristocracy who turns from being an ambitious young man into a ruthless power broker.