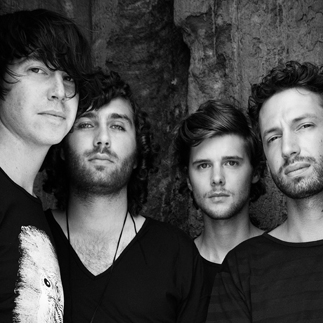 Australian/LA-based psychedelic-dance four-piece Miami Horror are set to return this fall with a new single, ‘Real Slow,‘ via Neon Gold on September 10th, with a double A-side 7″ to follow on the label in the fall.  This October, they embark on a fall tour spanning North and South America, including dates with fellow Aussies and friends Gold Fields.

According to band producer Benjamin Plant, “‘Real Slow’ was written around similar experiences that Aaron [Shanahan] and I were having at the time. It’s about finding that place or person were you feel secure enough to take things slowly. We wanted to write a song that is more than just a concept, we wanted to write about something we were actually experiencing rather than something imagined. We wanted to see how that emotion translated into our music. I’ve never been a huge fan of listening to songs about love, no matter how painful or joyous they are, they can seem mediocre, but once you have those experiences for yourself then suddenly, all those songs make sense and become something you can really feel.”

The past few years have seen the group, consisting of Plant (production/keyboards/bass), Aaron Shanahan (drums), Daniel Whitechurch (keyboards), and Josh Moriarty (guitars/vocals), release their highly anticipated debut, Illumination, to heady acclaim, as well as relocate to the US after lengthy tours of both their home country and abroad. Settling in Los Angeles, the four-piece quickly found inspiration in the glowing year-round Californian sun, set up a home studio, and eagerly started experimenting with new sounds and projects to ease their creative itch. Proving that time is of importance, the band, anchored by Plant, has spent the last year crafting and perfecting new material glittered with dream-gazey synth and matured song writing to deliver a new chapter in Miami Horror’s evolution. Their sophomore album will be released in Spring 2014.