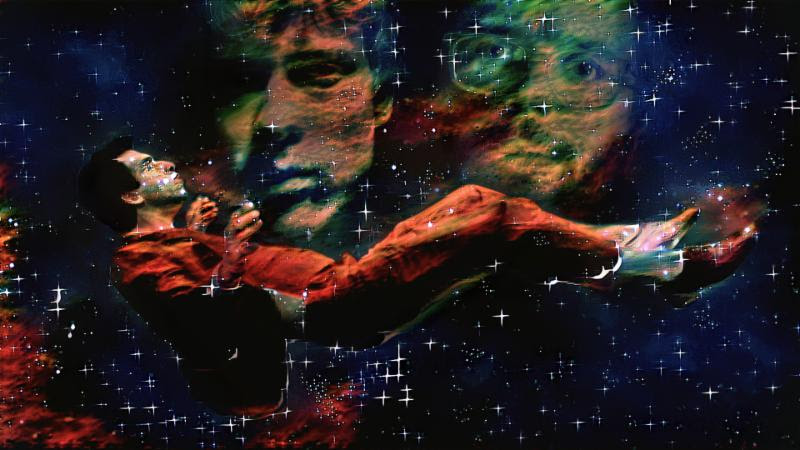 MGMT have released “When You Die,” the brand-new single off their full-length, Little Dark Age, due out in 2018. The song was released alongside a video starring actor Alex Karpovsky.

Directed by Mike Burakoff and Hallie Cooper-Novack, the video takes a darkly humorous and ultimately horrifying approach to the question of life after life. Famed French singer, Sébastien Tellier, lends his silky smooth laugh to the track, as Karpovsky moves through cycles of life, death and rebirth, and the story starts feeding back onto itself. Emotions and memories smear both forward and backwards, as pieces of the scenery of his final moments of life become the textures of his forever-looped eternity.

The video utilizes an amalgamation of AI Style Transfer technology techniques, making use of artificial neural networks to impose the stylistic qualities of an image onto video footage. The end result is an eerily familiar, dreamlike interpretation. The effect can appear beautiful at some times and horrific at others. Mike Burakoff and collaborator Jamie Dutcher (collectively known as King Drippa) developed their own software, nicknamed Glooby, to harness the power of Style Transfer for the production pipeline.

Earlier this year, MGMT released the title track for their upcoming album with the single “Little Dark Age” accompanied by a shadowy, cinematic music video featuring sinister and surreal vignettes of members Andrew VanWyngarden and Ben Goldwasser dressed in flamboyant gothic attire, stalked by the figure of Death.

The group’s fourth album is due to be released in early 2018 and was produced by MGMT, Patrick Wimberly (Chairlift, Kelela, Blood Orange), and long-time collaborator Dave Fridmann (Flaming Lips, Spoon, Tame Impala). Earlier this year the band announced via Twitter their new album would be titled Little Dark Age, later releasing in-studio visuals and snippets of music via Instagram.