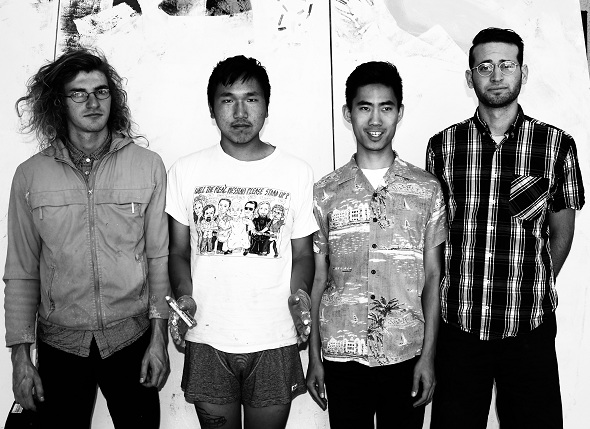 With a name like Meat Market, you’d expect this Oakland-based quartet to sound like the soundtrack to Saturday night in some douchey velvet-roped nightclub. You’d expect big thumping booty-bass and lascivious lyrics. You’d expect a fan-base of popped collars and bared midriffs. While the foursome does wield the power to pack in throngs of sweaty young people looking to dance, their sound bears little resemblance to the incessant thud of your standard club-banger. Instead, these four college-aged kids bust out a blend of surf guitar twang with garage-crafted power pop. Think The Ventures meets The Marked Men.

The band has already amassed a solid following in California with just a self-titled cassette/LP to their name. Meat Market now offers up two new songs via Suicide Squeeze. Debuting their B-side “The Return of Prince Donathunn” is a nod to the wave-riding instrumental groups of the ‘60s, with the steady 4/4 beat and dueling guitar leads belying the bands outspoken apathy towards surfing.

The two-song EP is now available worldwide compliments of Suicide Squeeze. The EP will be available both digitally and as a limited edition 7” (100 on coke-bottle clear, 400 on black) with a download coupon.

Side A: Too Tired
Side B: The Return of Prince Donathunn