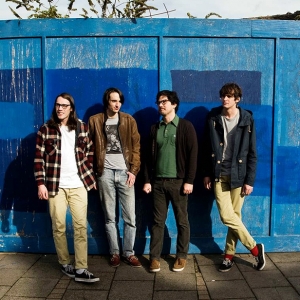 Today, Mazes share the new video for Better Ghosts’ cut ‘Notes Between F & E’, directed by James Alcock and shot at a Blackface Ram sale in Stirling, Scotland; one of Britain’s oldest livestock auctions. James’ primary inspiration was Herzog’s ‘How Much Wood Would A Woodchuck Chuck?’, inspired partly by the song and the lyrics that talks about hidden meanings and alternative interpretations.

The band’s Jack Cooper has said that “the video highlights what some may feel is a beautiful piece of Britain’s history, the strange tradition and rituals of the livestock auction, though others may see it as something entirely different.” Watch it above.

Following the heels of February’s ‘Ores & Minerals’, Mazes have returned with ‘Better Ghosts’, a mini-album that blurs the lines between ‘Ores & Minerals’, their live show, and what the future of Mazes may sound like. The ten track mini-album is out now via FatCat Records on vinyl and digital download.