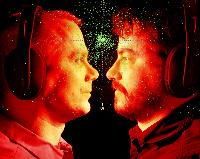 Yesterday, Matmos released The Marriage of True Minds, their first new album in over five years, via Thrill Jockey. It follows 2012’s The Ganzfeld EP, which was the culmination of four years of parapsychological experiments based on the Ganzfeld (“total field”) experiment and prominently features vocalists and voices for the first time in Matmos’ work. “Aetheric Vehicle” is based on the Ganzfeld session with Keith Fullerton Whitman and includes vocals by Jenn Wasner of Wye Oak. Matmos broke down the album version for The Believer/KCRW podcast “The Organist”. They’re currently on tour in North America playing fully transformed arrangements of new and old songs with fellow tour mates Horse Lords and offering a mix of video art, cover songs, improvisations and telepathic demonstrations.

^ with Mouse on Mars