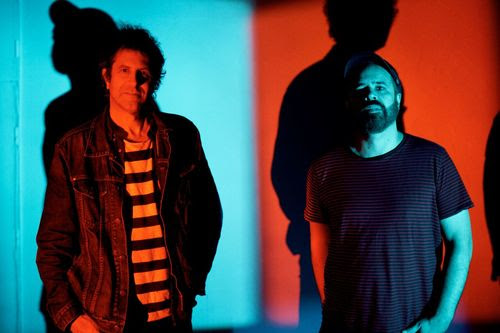 The new Swervedriver album is titled Future Ruins. It opens with “Mary Winter”, a song narrated by a recognizable Swervedriver archetype: a traveler, hurtling away from this world. “Planet Earth long gone/And my feet won’t touch the ground.” But where is the traveler headed? And why? The second song, “The Lonely Crowd Fades In The Air”, offers some possible answers: “We’ve stumbled into the end of days/Where the future comes home to cry…”

There’s a lot of foreboding with regard to the future on this album,” agrees Adam Franklin. “Space is in there a lot too. In the first song, the character is a spaceman who’s trying to remember what life is really like. Also, it could be about somewhere in the world where winter isn’t like the winter here. A sunny place, but it’s December or January and you’re trying to remember winter. Something’s going on.”

That something began in October 2017, with a two-week stint of tracking at MAKE Records Studio in Los Angeles. Having made I Wasn’t Born To Lose You hard on the heels of an Australian tour, the band decided to repeat the process and bottle the momentum of a just-completed US tour performing both Raise and Mezcal Head in their entirety. “That’s a good way to record,” says Adam, “because you’ve literally just seen the whites of the audience’s eyes and you’re thinking, ‘If that audience from last night were here now…’ You can’t get too mellow. We came home with 30 different songs.”

There quickly followed a further 10 days’ vocals and overdubs at Seaside Studios in Brighton. Stoking the creative energies was engineer TJ Doherty. A Grammy winner for his work on Wilco’s A Ghost Is Born, his diverse credit list also includes Lou Reed and Steely Dan, Stephen Malkmus and Joanna Newsom, Sonic Youth and Selfish Cunt. But the band knew him in a previous life, from their first decade of existence. “He was a fan,” says Adam. “We first met because he was down the front at all the gigs in New York and New Jersey a long lost time ago. He ended up going to engineering school and worked on all these cool records.”

The final 10 tracks were then mixed in spring 2018, as the band toured Europe – again, infusing the recordings with road-slick fumes. Future Ruins exhibits Swervedriver’s fabled widescreen escapism, but with a tension that echoes a sleeve image of Coney Island in skeletal monochrome, like a post mortem photograph of a failed utopia. The title song offers a grim assessment of humanity’s current condition: “We are ruled by fools/These are future ruins/That the king is insane/Is now old news.”

“That was an early lyric, I sang that one in LA, one of about three or four that I sang there,” notes Adam. “It just came out. A rage at the state of the world. There’s more where that came from. “Drone Lover”, a song that predates the last album, is a comment on the depersonalized nature of 21st century techno-warfare. For all its melody’s humming mood elevation, “The Lonely Crowd Fades In The Air” feels like an elegy, with one crushing couplet after another: “Choose your colors wisely/Because things ain’t the same as in days gone by.” That song’s title – “it has a resonance that fits with these times,” says Adam – evokes the alienation wrought by the mass embrace of so-called ‘social’ media; a perspective on our contemporary malaise that’s also echoed in “Everybody’s Going Somewhere And No-One’s Going Anywhere”, a spoken word dreamscape. “Everybody’s got the same amount of time on the planet,” explains Adam. “There might be a couple in Italy, 90 years old, they’ve been married for 70, they’ve never left the country, and they might possibly have had a better life than the person running around who gets a heart attack at 40 after earning 2 million dollars.”