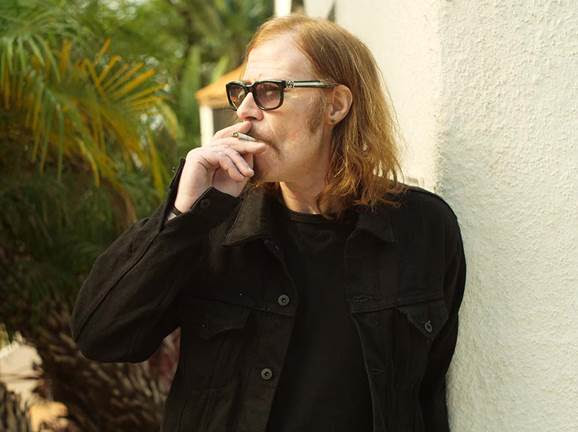 Mark Lanegan will release his new album Straight Songs Of Sorrow on May 8th via Heavenly Recordings, his memoir Sing Backwards And Weep is due to publish on April 28th. Ahead of the album and book’s arrival, Lanegan has today shared the single “Bleed All Over.”

Recently Mark Lanegan recently launched ‘The Vault’ an innovative web-based streaming platform powered by Spotify and Apple Music. By connecting to either platform, fans can explore Lanegan’s career, from the genesis of his recording career in 1984 through to his latest album Somebody’s Knocking. The Vault includes Lanegan’s solo material, his work with Screaming Trees, Queens of the Stone Age, Isobel Campbell and Soulsavers, as well as his many other collaborations and guest appearances. The platform lays out each key album with descriptions approved by Lanegan himself, giving fans an opportunity to engage further with this beloved artist’s wide-ranging body of work. The Vault also includes Mark Lanegan playlists created by fellow artists and kindred spirits. Click HERE to listen to the new one compiled by Peter Hook and Jack Bates.

When considering writing a novel, or a piece of music, it’s natural to wonder what might have inspired it: ‘the story behind the song’. Mark Lanegan’s new album, Straight Songs Of Sorrow, flips that equation. Here are 15 songs inspired by a story: his life story, as documented by his own hand in his forthcoming new memoir, Sing Backwards And Weep that will be published on April 28th, 2020 through Da Capo.

“Writing the book, I didn’t get catharsis,” he chuckles. “All I got was a Pandora’s box full of pain and misery. I went way in, and remembered shit I’d put away 20 years ago. But I started writing these songs the minute I was done, and I realised there was a depth of emotion because they were all linked to memories from this book. It was a relief to suddenly go back to music. Then I realized that was the gift of the book: these songs. I’m really proud of this record.”

Straight Songs Of Sorrow combines musical trace elements from early Mark Lanegan albums with the synthesized constructs of later work. The meditative acoustic guitar fingerpicking – provided by Lamb Of God’s Mark Morton – on “Apples From A Tree” and “Hanging On (For DRC)” echo 1994’s “Whiskey For The Holy Ghost”. Yet one of that record’s touchstones was Van Morrison’s Astral Weeks, echoed in the new album’s opener “I Wouldn’t Want To Say”, where Lanegan extemporizes à la Ballerina over musique concrète wave patterns generated by his latest favorite compositional tool, a miniature computer-synth called the Organelle. The lyric clings onto the music, emulating his book’s queasy momentum: “Swinging from death… to revival.”

“That song is the explanation, the beginning and middle and end of that entire period of time,” Mark says. “The encapsulation of the entire experience, book and record. So I started with that.”

Lanegan affirms that every song references a specific episode or person in the book, albeit some more explicitly than others. “Hanging On (For DRC)” is a loving ode to his friend Dylan Carlson, genius progenitor of drone metal and a fellow unlikely survivor of Seattle’s narcotic dramas. “I was always unhappy, and he was the guy who was always smiling, even through my crazy schemes that eventually got both of us into a lot of trouble.”

“At Zero Below” features two of the album’s many stellar guests. Singing admonitory harmonies with himself is Greg Dulli, another ’90s alt-rock veteran, Lanegan’s erstwhile partner in mischief and fellow Gutter Twin. The song’s incantatory fiddle is played by The Bad Seeds’ Warren Ellis. No lesser figure than Led Zeppelin’s John Paul Jones provides Mellotron on the serpentine “Ballad Of A Dying Rover”. Aside from mandolin, all “Daylight In The Nocturnal House’s” cobwebbed atmospherics are by Portishead’s Adrian Utley. Ed Harcourt is Lanegan’s pick for album MVP (“He’s all over it – everything that he plays, piano or Wurlitzer, becomes magical”), with special mention to bassist Jack Bates, son of Peter Hook; that duo make especially distinctive contributions to Churchbells, Ghosts a bleakly humorous lament to the drudgery of life on the road.

The material on the last two Mark Lanegan Band albums had Lanegan’s words set to music by various other sources. But aside from the Mark Morton collaborations, Straight Songs Of Sorrow was built from the ground up by Lanegan alone, aided by producer Alain Johannes, his longtime consigliere. Only two other songs have shared credits, and even these stay in-house: “Burying Ground” and “Eden Lost And Found” were co-written by Mark’s wife Shelley Brien, with whom he also duets on the Rita Coolidge/Kris Kristofferson-style ballad “This Game Of Love”. “Let’s put it this way,” says Mark. “Every girlfriend I’ve ever had, for any amount of time, left me. All the good ones left me! Until my current wife. It was great to sing that with Shelley, it really shows she’s a great singer. And it has a depth of emotion that I’m not used to. This is a more honest record than I’ve probably ever made.”