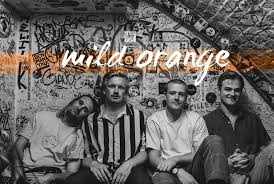 Mild orange includes guitar was born in 2017 in Dunedin, New Zealand. Founding members Josh Mehrtens and Josh Reid started writing songs in 2016 while rooming together and studying at University of Otago. Fellow students (and experienced musicians) Tom Kelk and Jack Ferguson joined shortly after, and the full Mild Orange sound came to be.

The group’s, whose sound has been compared Jeff Buckley and Mojave 3, debut album, Foreplay, was released independently in 2018, self-produced and mixed by frontman Josh Mehrtens. Recorded in their cold and dark-windowless Dunedin practice room and in their flat in Dunedin. Mehrtens, produced and engineered the album, then spent six months mixing in his bedroom and at the University library.

In February 2019 after all graduating from University of Otago, Mild Orange began recording their second album. The boys hunkered down at Josh Reid’s family Beach in Riversdale Beach for two months to work on writing and recording the project. A further recording session occurred at Josh Mehrtens’ family home in Arrowtown in July 2019, the place where Josh M also handled post-production, engineering and mixing the album. After months of tinkering, the album was then completed in January 2020.