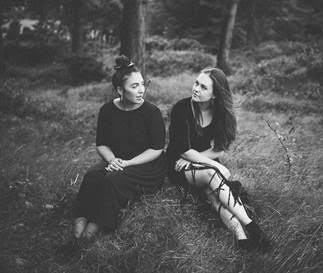 Irish  duo a recently relesed their debut EP Madrid, a haunting collision of glitchy electronics, heavenly harps and deeply personal lyrics – a combination the band refer to as “atmosfolk”, which was released via Trout Records on November 13th.

Gemma Doherty and Morgan MacIntyre formed Saint Sister in 2014, the duo recently opened Arcade Fire’s Will Butler and San Fermin. The pair were drawn together after being unsatisfied with the limitations of performing as solo artists. Along with their complex, interweaving harmonies, Gemma’s electronic harp brings a uniquely traditional Celtic dynamic to the duo’s sound.

The Madrid EP was recorded in a short, “intense” session at County Kerry’s Noise studio by Alex Ryan, but not a second of it sounds rushed. The tracks on Madrid variously call to mind Feist, Patrick Wolf, Kathryn Williams, as well as the musicians Morgan calls “the great storytellers” – Joni Mitchell, Joan Baez and Bob Dylan. Saint Sister’s “atmosfolk” sound, described by the band as “a mix of soulful vocal harmonies, dreamy synth and electro-acoustic harp,” is entirely their own creation.

“You ask me if I’m happy – I’ve been wondering that too,” the pair sing on ‘Versions of Hate’, and while almost every line on Madrid is as eviscerating as this, Morgan insists that Saint Sister’s material isn’t entirely drawn from personal experience. “It’s not really feasible to rip apart my own life for a song the way I used to,” she explains. If nothing else, that suggests the dedication and devotion that Saint Sister put into their music.