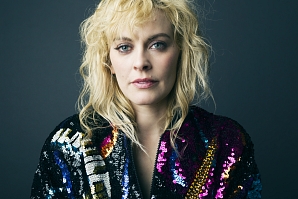 In a dispatch from her tour with Local Natives, Laurel Sprengelmeyer, a.k.a. Little Scream, shares the new video for “Silent Moon” from her album, Cult Following. Produced and edited by Sprengelmeyer and directed by Kaveh Nabatian, the video stars New Orleans underground drag queen Neon Burgundy and illustrates the longing found in the lyrics:

Of the inspiration behind the video, Laurel says: “I started writing the song ‘Silent Moon’ while in Hong Kong working on a film script in 2014 after seeing Tsai Ming-liang’s film The Wayward Cloud. The song and video were both inspired by a scene in that film where the main character sneaks into a reservoir at night, turns into a sea creature, and sings to the moon.”

Don’t miss Little Scream on tour with Local Natives right now – dates below. Cult Following is out now in addition to her protest anthem People, all proceeds from the latter are going to the ACLU and Planned Parenthood.