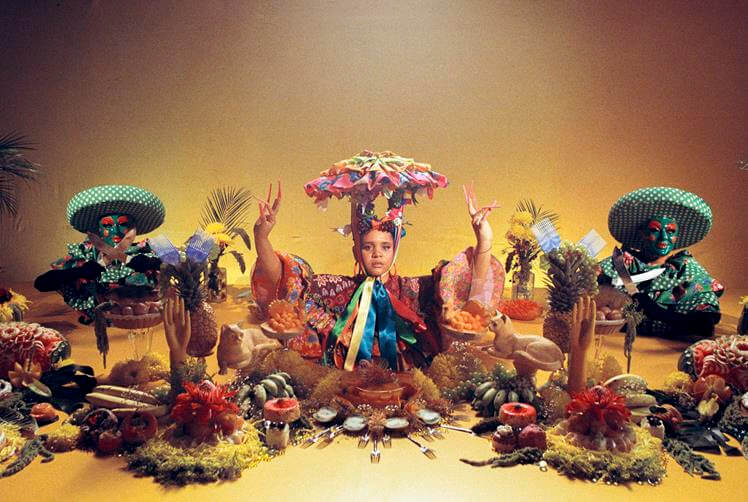 Lido Pimienta has shared a new video for “Coming Thru” today, a track featured on her album Miss Colombia.
“The song is about surviving, deciding when to share and when to stop sharing, and understanding when one is being used,” Pimienta said of “Coming Thru.” “The characters could be your own conscience, anxieties or fears.” Of the new video, she added, “This is a third installment between Orly Anan and I, and with the support of our director, cinematographer and amazing crew, we made it happen in the safest way during the pandemic in Mexico City. The creatures next to me are acting as my conscience but most importantly, my sense of power, surrounded by the abundance of colorful fruits and foods that are to be shared ONLY by the ones who want to protect us.”

This Sunday at Noon PT / 3:00 PM ET, Pimienta will perform at the 2021 Grammy Awards Premiere Ceremony which will stream live at Grammy.com. Pimienta’s first-ever Grammy nomination, ‘Miss Colombia’ is nominated in the ‘Best Latin Rock or Alternative Album’ category. Pimienta recently spoke with Grammy.com about being a first-time nominee and her inspirations behind the album – read that conversation HERE.

The album fuses electro-cumbia with pop, it’s title was in-part inspired by the 2015 Miss Universe mishap in which Steve Harvey mistakenly crowned Miss Colombia, instead of Miss Philippines. It caused Lido to reflect on the anti-blackness she’s experienced. In a review broadcast on All Things Considered, NPR described the album as “a complicated ode to a country and a culture that still struggles to celebrate its black and Indigenous women.”