“Let’s Be Friends” by Pink Martini 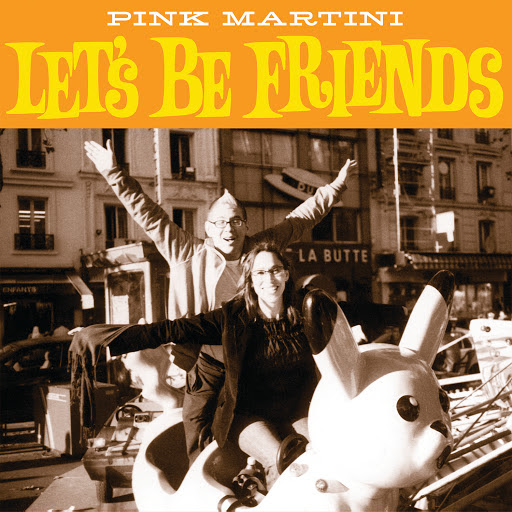 “Let’s Be Friends” by Pink Martini
Share on TwitterShare on PinterestShare on PocketShare on RedditShare on FacebookShare on Email
Pink Martini have dropped “Let’s Be Friends”, a new song out via their own label Heinz Records. The track brings back together the songwriting duo responsible for the band’s biggest hits – bandleader Thomas Lauderdale and singer China Forbes. The two teamed with writer/producer Jim Bianco to create a charming ditty in classic Great American Songbook style. Of the song, Forbes says: “‘Lets be Friends’ is the first song Thomas and I wrote with writer/producer Jim Bianco; we challenged ourselves to write an old-fashioned song that was NOT about love. We tried to make a song about friendship and all the ways friends can complement each other, but in the end it still has an undercurrent of romance because, well, that’s unavoidable!”
The single marks the first release of new music from Pink Martini since last year’s EPs Bésame Mucho and Tomorrow.  It also marks the return of Lauderdale and Forbes as songwriting collaborators; working with Bianco sparked new energy into their 23-year songwriting partnership. The New York Times has called singer China Forbes “an unpretentious, pitch-perfect chanteuse” and that sentiment holds true for “Let’s Be Friends.” The track also highlights the band’s penchant for crafting music that led Variety to say, “impressive at every musician’s station, this ensemble produces music that’s charming and elegant … ” and The Washington Post notes, “this is rich, hugely approachable music, utterly cosmopolitan yet utterly unpretentious. And it seems to speak to just about everybody.”
In 1994 Lauderdale had finished college and returned to his hometown of Portland, OR.  He was working at City Hall with an eye towards running for office. Being a classically trained pianist, music was always in the background, and he formed his “little orchestra” Pink Martini as a means to provide music for political fundraisers for progressive causes near to his heart – including civil rights, affordable housing, the environment, and public broadcasting. China Forbes, Lauderdale’s friend from their college days at Harvard, joined the group the following year, and the first song they wrote together, “Sympathique” (Je ne veus pas travailler), became an overnight sensation in France, where it remains a mantra (“Je ne veux pas travailler” translates to “I don’t want to work”) for striking French workers. Politics continues to be a focal point for the band, as both Lauderdale and Pink Martini lend their voice to progressive causes.