EERA has shared the first single and video for the song “Ladder” from her upcoming album Speak, out December 3rd via Just Dust Recordings. EERA is the project of the Berlin-based Norwegian singer, songwriter and guitarist Anna Lena Bruland.

“’Ladder’ is a song about opportunity and about trying to make someone else see that they have a lot to be grateful for, which they may not realize themselves; pushing down the ladder signifying sabotaging oneself.”

After EERA had toured with Ghostpoet and Mitski, Speak was partly recorded in London but the majority in Berlin, where Anna Lena moved to in 2019 after a few years of living in London. As on her previous album, Reflection Of Youth, Speak was made by Anna Lena, producer Allister Kellaway and bandmate Ed Bernez, except for the drums on “Ladder” which are by Tobias Humble – also Anna Lena’s partner, and responsible for the album’s striking cover photo of Anna Lena, taken on Infra-red film, which turns green particles pink – a process developed by the US during WWI to improve aerial intelligence photography.

Whereas Reflection Of Youth took intriguing musical cues from the likes of PJ Harvey, Deerhoof and Elliott Smith, Speak is more aligned to Broadcast, My Bloody Valentine and Lush, adding synthesizers to create a euphoric and dynamic setting for Anna Lena’s vibrant vocals. There may be elements of shoegaze here but she is not looking down at her shoes, but directly into the eyes of the listener; all the better to communicate what she is saying. 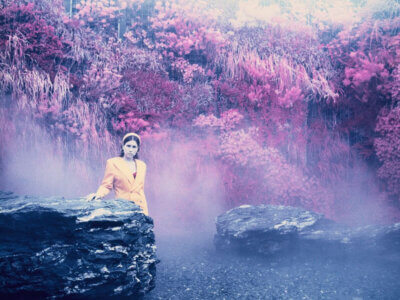