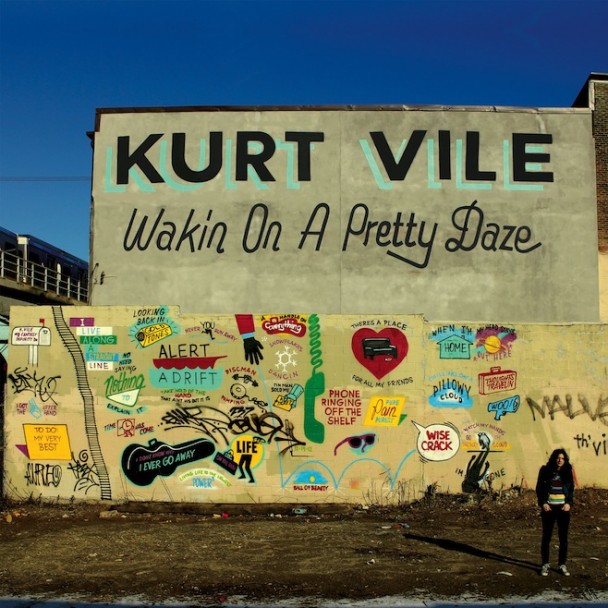 “Sometimes when I get in my zone, you’d think I was stoned/but as they say I don’t touch the stuff” is a defining lyric on Kurt Vile’s latest album, Wakin On A Pretty Daze. The reason for the poignancy of these words is because this record is a pure dope cloud of an album, it couldn’t be more hazy, sedate and down right fuzzy, the only way it could sound even more blazed would be if it came carrying a bag of potato chips whilst chuckling like Beavis and Butthead. But as Vile states he doesn’t care for the sweet Mary Jane, which means he’s a naturally comatose fella, happy to let his new opus gradually unravel like a slow motion ball of yarn.

Wakin On A Pretty Daze is Vile’s fifth outing under his own moniker and it would seem although each song is a subdued stroll through the sleepier parts of our protagonists mind, Mr Vile has decided to extend his folky/country tinged ditties to a double LP that stretches out over 69 fuzzy minutes. Equally a myriad of tracks happily glide along past the six/seven minute mark with the final take ‘Goldtone’ swelling up to a plus ten minutes in duration. The overbearing feeling with ‘…Daze’ is that vibe you get when you’ve been drinking all afternoon and instead of being paralytic, everything feels like it is in slow motion, as if your batteries are gradually running out.

‘Was All Talk’ possesses some urgent drums but when paired with atmospheric strums and Vile’s laidback drawl, any movement towards anything other than sombre is quickly quelled. ‘Too Hard’ typifies the elusive nature of ‘…Daze’ making for an ode that is almost vapour like, just as the strums and tender words display themselves they dissipate like a wafer thin cloud. “I’ll promise not to smoke too much and I promise not to party too hard” Vile slurs, this is either a song written after a big night or indeed the sobering notion that intoxication is no longer needed in this frail, aloof realm Vile populates. The more upfront nugget, ‘Snowflakes Are Dancing’ contains another suitable narrative to embellish upon ‘…Daze’. Vile, with a little bit more urgency announces “Snowflakes are dancing/discman is pumping/headphones are loud/chilling on a pillowy cloud”. A discman?! Who owns in discman in 2013?!

Kurt Cobain once said he could see himself going in a more acoustic, folk orientated direction once Nirvana wrapped up. Sadly this never happened, however the grungy, folk stylings of ‘…Daze’ is almost what you would imagine Cobain to have produced. The album is as grungy as it is sedate, like the angst of grunge has been diluted some what but its raw frame work still remains.