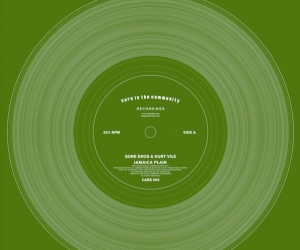 Kurt Vile and Robert Robinson were introduced to each other back in 2001 by a mutual friend because they were born on the same day (January 3,1980), and by the following year they had begun recording these recently unearthed and previously unreleased tracks.  As one of the most celebrated American songwriters of today, now on his fifth studio album recently released to widespread international acclaim, Kurt Vile really needs no introduction (well he does have his own day in Philadelphia). Collaborator and long-time friend Robert Robinson is a past member of The Violators, has toured in Ariel Pink’s band, but is best known for his own outfit, Sore Eros.

The EP’s title track takes its name from the Boston town in Massachusetts, where it was recorded, referred to in the 19th century as “the Eden of America.” This unhurried and meandering track, that opens with its simple finger-picked melody on acoustic guitar, is a melancholic  evocation of a pastoral idyll that’s enhanced by the solely analog production employed across the whole record. The track proposes itself as a definitive piece of Americana rich in visual imagery. But just as the “Eden” of Jamaica Plain was a construct of the 1800s, the track acknowledges its modernity with the harmonious use of electronic instruments, such as the inspired use of drum machine that should really be incongruous, so that by the end, the Korg synth has mutated into a wistful bird song as the sun sets over Jamaica Pond.

“Serum” is the closest thing this EP gets to a conventional song structure and length. Robinson’s naïve vocal style cuts through Vile’s gloopy laudanum influenced remix treatment of the instrumentation.

“Calling Out of Work” returns to the territory of “Jamaica Plain,” albeit a more abstract interior landscape. It was recorded a year later than the first two tracks at Kurt Vile’s home in Philadelphia, just before he went on to form The War On Drugs with Adam Granduciel. Given the title and that biographically we know it was an unhappy time for Vile, working as a forklift truck driver, its easy to read this track as a form of meditative introspection.