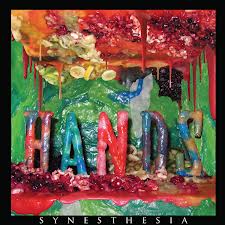 Los Angeles-based Hands will release their debut full-length, Synesthesia on April 30 via Kill Rock Stars. The album follows up their Massive Context EP (Small Plates) released last year and a 7″ released on White Iris in January. A relative newcomer to the LA scene, Hands began as a two-piece from Philadelphia before Geoff Halliday and Ryan Sweeney headed west and added the low and thump of Hess and Staniloff. Hands makes music like a rip tide, swirling in overlapping loops and riffs. The group’s members Geoff Halliday, Ryan Sweeney, Sean Hess and Alex Staniloff – craft their hypnotic sound from a single dropping note that builds into a reverberating roar that crashes over you like a wave.