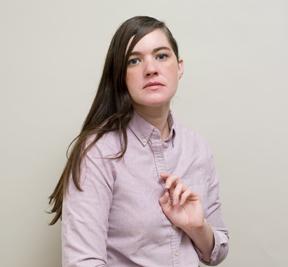 Share on TwitterShare on PinterestShare on PocketShare on RedditShare on FacebookShare on Email
Julianna Barwick has shared a live video of her song “Crystal Lake” directed by Derrick Belcham and filmed by Belcham and E Lee Smith during Julianna’s record release show at Judson Church in New York. The video captures her expanded live set up with guitarist Scott Bell, and special guests violist Rose Nelis and vocalists Sharon Van Etten, Kate McGuire, Taraka and Nimai Larson (Prince Rama). The church’s cavernous hall serves as a resonant, reverent space where the layered sounds of “Crystal Lake” vault into the arches & apse. Barwick’s icy tones, Nelis’ skittering viola, Bell’s wine-glass-to-Mack-truck guitar, and the choir’s gauzy depth overwhelm and envelop the senses to create an intimate experience.Barwick & Belcham also recently collaborated on a live video for “The Harbinger” filmed for La Blogothèque’s Take Away Show series. The video highlights Julianna’s angelic voice among the majesty of the Icelandic landscape. Filmed in Thingvellir National Park, the song is built on a simple series of 6 notes, with Julianna looping her vocals to create a haunting, organic melody.
Barwick, currently on tour with Sigur Rós, has also announced a run of west coast US dates starting in November. Her headline tour starts in Lincoln, NE on November 15 and heads out to the coast with stops in Seattle, as well as San Francisco, Los Angeles and San Diego where she’ll appear with Mark McGuire. A full set of dates is listed below.