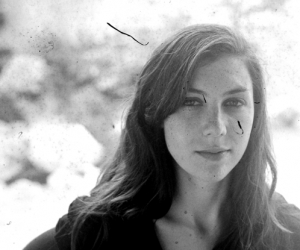 Domino Records has announced the arrival of Julia Holter’s new album, Loud City Song.   The first single and album will be released on August 19th 2013. Julia will be in the UK in August for a string of live dates finishing with her own show at London’s Cecil Sharp House on August 20th. The album is Holter’s third full length release in as many years – following 2011’s debut Tragedy and last year’s follow-up,  Ekstasis.

The songs that make up Loud City Song have origins that pre-date 2011’s debut Tragedy – coaxed out and finessed as demos in Holter’s bedroom studio and then finally coalesced into one thrillingly cohesive experience in the latter stages of 2012 by Holter and co-producer Cole Marsden Grief-Neill and an ensemble of Los Angeles musicians. The result is an album of enormous ambition – Holter taking inspiration from Collette’s 1944 novella Gigi and using it as a prism through which to explore her relationship with her hometown of Los Angeles and modern life universally, taking cues from the work of Joni Mitchell and the poetry of Frank O’Hara but forging those touch-points into something resolutely unique.