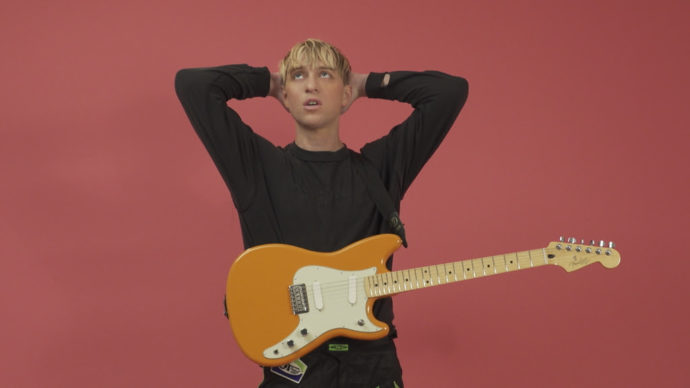 When life hands you lemons, you make lemonade, or for Jonny Pierce, lead singer, songwriter and founding member of the Drums, you make an album. Abysmal Thoughts is the Drums’ fourth studio album, which dropped on June 16th via Anti. During Max Asper’s interview, Pierce was nice enough to tell us, about five of his favourite albums.

The first album that I ever heard that made me realize that I wanted to make music was by a band called Joy Electric, and the album was called Melody. It’s like a really bizarre fairy tale synth pop from 1993 and they are out of Orange Country, California.

Bjork’s album Homogenic. That was the album for me that helped me realize, not only that I want to make music, but, as I make music, I can do really what ever I wanted. There didn’t have to be rules, you could just make something really amazing that
nobody had ever heard before.

That album for me was just…It sounds like they’re – instead of using a drum kit on their songs they will just tap a pencil on a desk into a microphone. That album, for me, also is a testament to great song writing, that you don’t need a lot of production. I think that helps me be relaxed about making an album when I started the Drums. I said to myself, “Look, I have no money. I’m riding my bike 6 miles to work to work at a shitty outlet mall only to ride back and make music.” I couldn’t afford to make a record. Knowing that Beat Happening did that with a pencil and a desk for a drum kit…I have this rule, if the song is good just by whistling it, then you don’t really need a bunch of gear and production. People will connect to the melody, and people will connect to the lyrics. So, Beat Happening was big for me.

Daft Punk’s Homework was really big for me growing up. I know Daft Punk is this big huge thing…It’s like Daft Punk and Coachella are almost on the same level. Daft Punk to me started just so pure, and there still is a purity. You can see that they are like, “What’s going to get everyone excited?” versus what’s just going ot make them excited. That Homework record is just so raw, they were 16 when they made it and I heard a rumor that their dad mixed it in their basement. It’s just a super cool record and there was nothing like that when that came out, that was huge for me. I bought that at Walmart when I was just a little kid. I remember that I just couldn’t believe it, that “Around the World” bass line was just blowing my mind.

I was really into Roni Size, who is a drum and bass artist out of the UK and he put out a double record called, New Forms, and that was really special drum and bass stuff which you can hear a couple influences during “Your Tenderness” and on a song called “Mirror,” there’s a little bit there as well.