Brooklyn band Human People has released a new video for “Jenny.” The clip was directed by the band’s own Marisa Gershenhorn (guitar/vocals) and “is inspired by sci-fi stories like Videodrome and Neon Genesis Evangelion that deal with identity. It’s about the ways we curate an understandable version of ourselves to present to the world.” The track is off the band’s debut full-length, Butterflies Drink Turtle Tears, now out via Exploding In Sound

Hayley Livingston (guitar/vocals), Marisa Gershenhorn (guitar/vocals), Vicki Guillem (drums), and Abby Austin (bass) met in 2014 amongst NYU and the city’s indie rock scene. They bonded over a shared love of classic punk, and soon after joined forces to create Human People. In 2016, they released two EPs—Sleep Year and Veronica—that blended the primal energy of early New York punk, the off-kilter tunefulness of ‘90s alternative, and the unbridled eccentricity shared by their community of fellow Northeastern musicians (bands like Washer, Stove, and Remember Sports).

On Butterflies Drink Turtle Tears, Gershenhorn and Livingston wrote their contributions separately and unexpectedly found their respective songs revolved around common threads of detachment and isolation. These are punk anthems that channel the unsettling sensation of being surrounded by people yet feeling totally alone. It’s a difficult to verbalize but universal frustration; the inescapable craving to connect with others while often finding nothing and no one to relate to. “California” displays the band’s sardonic side while revealing the kind of anxiety that often lurks beneath a care-free surface, and tracks like “Black Flowers” and “Jenny” explore how the gulf between yourself and everyone else can be difficult to bridge, especially when that withdrawal is self-imposed. Throughout the album Human People are vulnerable yet biting, wearing flaws and dissatisfaction on their sleeves, self-reflective but never apologizing for feeling. 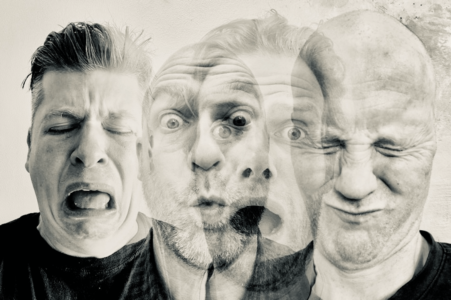 “Why Deny It?” By Blacklisters