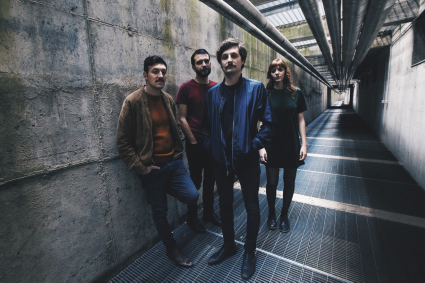 Italian punks The Gluts gave recently announced their signing to Fuzz Club Records for their forthcoming LP ‘Estasi’ – the follow up from 2014’s debut ‘Warsaw’. The new album is officially released May 5th but the band have now teased first single “Squirrel”. You can listen to the boisterous “Squirrel” below.

‘Estasi’ is driven by a relentlessly brooding rhythm section, pummeling and almost gothic guitars, stabs of swirling feedback and tortured, barking vocals. Totally primal and piercing in its delivery, it’s ten tracks of psychedelic punk bringing to mind an intense, bludgeoning mix of Drive Like Jehu and Metz with a gloomy nod to Killing Joke and Bauhaus.

“Despite leaning further on the noise-rock/psych side of things, The Gluts have always had a DIY punk ethos at their heart – most evident in their primitive energy, both on record and live. Since the release of their debut in 2014, the band have playing extensively across Italy, including a couple of shows with NY psych legends White Hills.

With the release of LP2 – the first on Fuzz Club – it’s clear The Gluts are undeniable set to blow away fuzz-heads far and wide with an album this good and incessantly noisy. Already earning a strong reputation across Italy these guys are about to take their angular noise-rock to international waters – with something to love for lovers of punk, psych and noise alike.