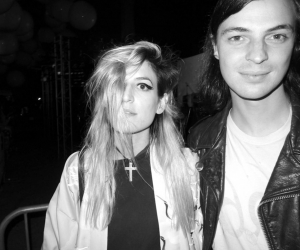 The Year of the Snake is proving to be quite productive for LA-based industrial pop duo, IO ECHO. Embarking on their fourth tour of 2013, with fellow avant-rockers CSS and MS MR in support of their debut LP Ministry of Love released  IAMSOUND.

After dates with the likes of Garbage, Bloc Party, and Joy Formidable and having shared the stage with the likes of No Doubt and Nine Inch Nails, IO ECHO continue their live shows of self-described “pastel doom,” dimmed strobe lights and sensu fans. Front woman Ioanna Gika draws from her time spent living in Asia by melding Eastern orchestration, including Koto and Chinese Violin, into the band’s singular style.