Interview With Molly From ‘Widowspeak’ 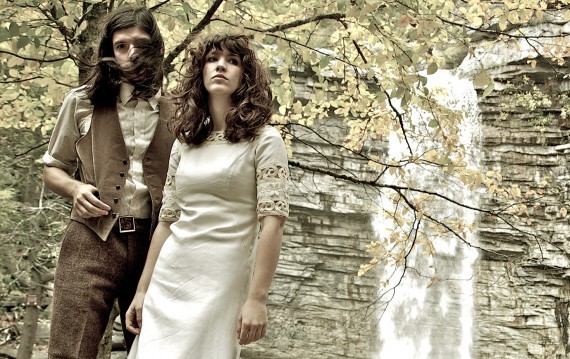 Northern Transmissions managed to track down Molly Hamilton from ‘Widowspeak’, while the band was getting ready for their show at the second weekend of ‘Austin City Limits Music Festival’. The band’s EP The Swamps is now out on Captured Tracks.

NT: First off, the band is labeled as “Swoon Lords”, which sounds pretty cool. Who came up with this, and when?

MH: It’s a fun label. A while ago we played a show at Barnard College/Columbia University, it was for the WBAR-B-Q Fest. The guys that booked the show described our music that way on the poster. I guess the tag just kind of stuck.

NT: I think that you had planned to put out another LP after Almanac, but you released The Swamps, which is an EP. Was there an urgency to get these songs out?

MH: When we started writing the record our music had changed. We really wanted to do something different musically. The songs were more like a miniature story than a song. When we were recording the songs just kind of flowed and happened. I really enjoyed the whole process of how the EP came together. The whole thing was kind of a natural occurrence.

NT: You talk about the fear of stagnation. Do you mean about society or on a personal level?

MH: I think it’s more on a personal level. I mean when we were writing The Swamps, we wrote about being where we were physically. It was a beautiful part of the South, where we were living. I think that it’s really important to appreciate your surroundings and not be complacent about it.

NT: Your musical influences cross many eras, more than most bands, including everything from Western to Ambient. Do you and Rob both bring your ideas to the table separately, or is it a mutual admiration of similar artists that inspire the two of you?

MH: When we first started writing, the writing was a bit more separate. I think we both really kind of had our own intentions. I would come to Rob with different ideas and chord progressions, then he would put everything together. Now we really write everything together, pretty much all the songs are collaborations. I think it really works better that way.

NT: You used to have a real fear of singing in front of crowds. Has it gotten a little easier for you these days?

MH: I really had really bad stage fright. The more we played the easier it has gotten. When we’re on tour we really get into the swing of things, so I kind of know what to expect a bit. Sometimes when we play bigger venues or shows it can still get a little nervy.

NT: The band has gone through a couple of lineup changes since its inception. Is it challenging musically or personally when new members join?

MH: It’s less difficult because Rob and I write everything. It really is more of an interpersonal challenge. At this point we all really get along well. It is actually interesting, we get to play with different people so it never really gets boring, it actually keeps things fresh.

NT: Did living in Washington State have an influence on your writing?

MH: Definitely, it took moving for me to see it. People are really laid back there, it rains so much. You spend so much of your time indoors making music. You see most of the same people all the time. It’s hard to pinpoint the exact influence; I think it’s a combination of those things. I really do miss living in Washington State. I really miss the mountains and trees, there’s not a ton in New York City (lol).

NT: Which five albums are influencing you these days?

Smog – A River Ain’t Too Much to Love