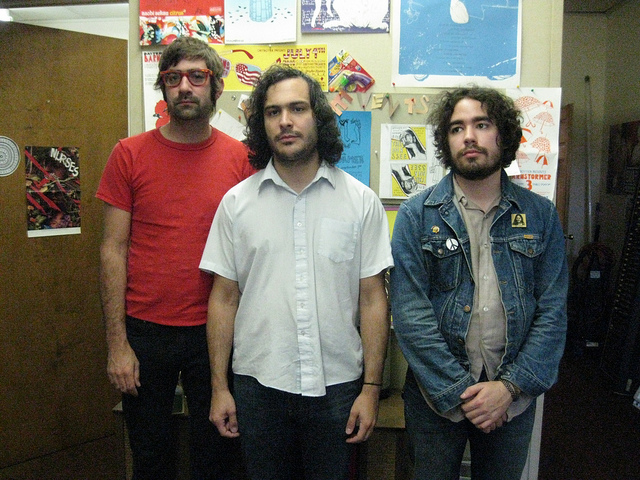 Northern Transmissions chats with Mike Polizze from ‘Purling Hiss’ about the band’s upcoming Album ‘Water On Mars’, working with long time friend Adam Granduciel from ‘The War On Drugs’ and a number of other interesting subjects. ‘Water On Mars’ comes out March 19th via Drag City.

NT: What made you decide to step out of the Bedroom for this album? I think most of your Records in the past have been recorded at home?

MP: I’ve been playing with a band for the last couple of years, and though i still record ideas at home a lot, it seemed appropriate to go into the studio since we operate as a band now. Everything before this new album has been recorded by myself at home on a 4 track.

NT: Is ‘Water On Mars’ more structured and polished then your other releases?

MP: Yes. A lot of my old recordings weren’t intended to be released at the time of their recording, and so some of that stuff sounds like meandering half-realized ideas, which i love. I’ve always enjoyed listening to demos and out-takes of other artists, to watch the creative process. This time around, it was great to narrow things down, and trim the fat on song ideas. We recorded it at Uniform Recording by our friend Jeff Ziegler who has also recorded Kurt Vile, War on Drugs, Clockcleaner, Puerto Rico Flowers etc. He’s a big part of the music community in Philly.

NT: You worked with Adam Granduciel from ‘The War On Drugs’ on the track ‘Lolita’, how did you guys end up working together?

MP: I’ve known and been friends with Adam for many years. Adam curated an episode for Weathervane music, (http://weathervanemusic.org/) and chose us as the band for the episode, where he helped produce “Lolita”.  Adam also helped co-produce our new album, Water on Mars.

NT: Is ‘Purling Hiss’ a band now? It started out as a solo project.

MP: Yes, we are a band! There’s 3 members including myself. Mike Sneeringer plays drums and sings backing vocals, and Kiel Everett plays bass. The band formed in the summer of 2010 after Kurt Vile invited Purling Hiss to do a full US tour, prompting me to form the band.

NT: You have a bit of a different style of playing guitar, kind of fast, but there’s a warmth to it as well. Were you self-taught? Or did you take lessons as a kid?

MP: A little bit of both.. but mostly self-taught. I took piano lessons when i was a child, and some guitar lessons, so i learned the fundamentals but began to develop my own style of what interested me the most. Mostly playing along to records and trying to copy the guitar riffs i was hearing. I got obsessed with doing that, and spent many many hours a day, noodling on guitar when i was a bored teenager.

NT: Are you excited that some of your musical peers including Adam (The War On Drugs) Jeff Tweedy (Wilco) and Ripley (Moon Duo, Wooden Shjips) are fans of your work?

MP: Yea it’s really nice to have toured with some of the bands mentioned, and that they dig what we’re doing. It definitely reinforces my creativity to keep progressing.

NT: Can you tell the readers some cool facts about Philadelphia.

MP: Musically, there is a great community there. I’ve been playing in my other band, Birds of Maya since 2004, and we still play together. We had a great summer day festival my friend put together, back in August called Kensington Picnic, (http://kensingtonpicnic.tumblr.com/) which featured great Philly(or near Philly) artists, Watery Love, Steve Gunn, Blues Control, Chris Forsyth, Meg Baird, Daniel Bachman, Birds of Maya, Mary Lattimore and Jeff Ziegler. Also, check out Richie Records//Testostertunes http://www.testostertunes.com/. That’s what’s cool in Philly.

NT: Which five albums from your collection continue to influence you these days?

MP: Here’s some timeless classics i was just listening to in the last 2 days