Interview with Mat from Boats 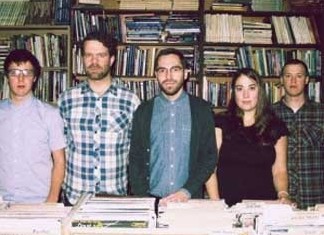 Northern Transmissions had the chance to chat with Mat from ‘Boats’. Their upcoming Album ‘A Fairway Full Of Miners’ comes out ‘Kill Rock Stars’.

NT: The songs comes from pretty unique stories and unrelated concepts at times, can you tell me a bit about the writing process?

MK: I wish there was a tangible writing process. If I had some sort of formula I would write a lot more songs. Every time I do I feel like I’m doing it for the first time. I don’t know how to write songs.

NT: Your vocals are quite different than many other singers, have you always sung in this style? Were there a couple of singers that inspired you along the way?

MK: I have always sung like this for the most part, and I never really thought it was very different. Apparently it sounds like a 12 year old girl. Some singers that I thought I sounded like was Billy Corgan or my friend Jay Churko (Transistor Sound & Lighting co, look them up if you don’t remember). But apparently it’s 12 year old girl instead.

NT: ‘Cannonballs Cannonballs’ featured a choir, various horns, and quite a number of different musicians. Can we expect something similar on ‘A Fairway Full Of Miners’?

MK: Yes. We like to make a big unnecessary spectacle in the studio.This time we brought in the Man Choir, a bunch of burly voiced local musicians and well wishers for some deep singing. Also clap parties, and guitar torture.

NT: You guys put out a cassette recently, what is it that is so attractive to this technology these days?

MK: Nothing. Absolutely nothing. It is a horrible technology. But it is one tenth the price of doing a seven-inch on vinyl. I don’t care for vinyl either. We just wanted to put out something cheap that could have a download code attached. We could have made a spoon or a lawn chair, or perhaps one of those mini skateboards. But I guess it’s fun to dust off your old cassette players so you can remind yourself how annoying they are. I think all this nostalgia for lost technologies has gone way too far.

NT: Boats has done roughly eight North American Tours, where have been some of the more memorable shows?

MK: That’s a hard one… there have been so many. I think just being in cities that you never thought you would go to and meeting the people who live there is part of the charm. I’ve lived in Winnipeg for most of my life so going somewhere where they have their own landmarks and weird inside jokes like we do is very fascinating for me, especially when the day before they were just a dot on a map.

NT: The song ‘Advice On Bears’ is a bit of a heartfelt track, can you tell us a bit about the inspiration behind it?

MK: I spent the first half of my adulthood working at various summer camps around the world and did a lot of camping. Whenever the topics of bears came up we would always say “just remember they are more afraid of you then you are of them.” I get pretty anxious around most people so I thought this would be great advice for me as well so maybe I should put it in a song so I can constantly repeat it to keep remembering my own advice.

NT: Of five Albums from your collection, which continue to inspire you the most?

In The Aeroplane Over The Sea – Neutral Milk Hotel