Interview with James from Yo La Tengo 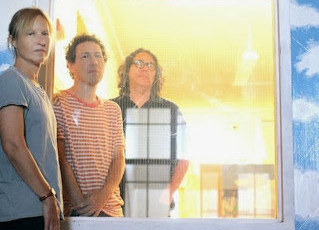 Charles Brownstein spoke with James McNew of Yo La Tengo, The band was on day two of their tour at a stop in West Virginia. Their latest album, ‘Fade’, is now available on Matador Records.

CB: I was scanning the band’s Discography the other day and came to realize that it has been sixteen years since ‘I Can Hear The Heart Beating As One’ was released. Are you surprised at the longevity of the band? Seems like yesterday that that album came out.

JM: I’m surprised and proud. At times I don’t really think about it, I mean it’s our life and I’m really happy. We get to do what we dreamed about, and we never take it for granted. As a band we make each other happy, so it’s never lost on us. It does kind of seem like yesterday that we put that record out, especially now — we’re touring this record and it kind of feels like the first day of school. We still play all those songs live, so it doesn’t really feel like it’s been that long.

CB: Does the band switch up song arrangements often when playing them live? You guys must really know what to expect after playing so many shows together.

JM: Nothing is really finished, no song is really immune to any changes. It’s also a pretty cool feeling to have songs grow and change, as we do. The songs also depend on where we are playing; we keep track of every song we play at a show. We’re playing a number of songs on the new album, as well as many older ones. We are even doing new covers, which we have never done before. The shows are made up of two sets, so they will be fresh and interesting every night.

CB: Would you consider the period between 1993-2000 a special period for the band? You guys had released three of your most successful albums during that era.

JM: I think it definitely was, during that time we were finding ways to work and make music together. It was a very creative and productive time for us. Many new people were discovering the band at that point, it was really a different time. I’m trying to make it sound like I’m not as old as the hills (lol), but it really was an exciting time. I really still feel that way. I’m definitely still excited to be making music with Georgia and Ira.

CB: You guys have worked with Roger Moutenot for a number of years. On the new album you worked with John McEntire. Why the change after all these years?

JM: We’ve been big fans of John’s bands and his production work with other bands’ albums he’s done. He really has worked on many great albums. We are really big fans of the Tortoise Records, and I really love ‘Man–Made’ by Teenage Fanclub, he worked on that one as well. He really added a new dimension, we’ve known John for twenty years. It’s kind of surprising we have never worked together in the past, and we couldn’t figure out why. It kind of seemed like he was overlooked before, so he was our first choice.

CB: You guys have new generations of fans showing up at your shows, and they actually know the lyrics and sing along, how does this make you feel?

JM: It’s really great seeing younger people at the shows, I’m not sure how they find out about us, they might have picked out stuff from their parents record collection (lol). But actually, you would think that they would probably rebel. Whatever music your parents like, you’re not supposed to like (lol). I wouldn’t advise parents to play our music to their kids, that might be dangerous, they might want to play them some Phil Collins instead (lol). Patton Oswalt said that if you play Phil Collins for your kids, they will get creative and listen to great music. I definitely agree with him.

CB: Which five albums inspired you as a Kid?