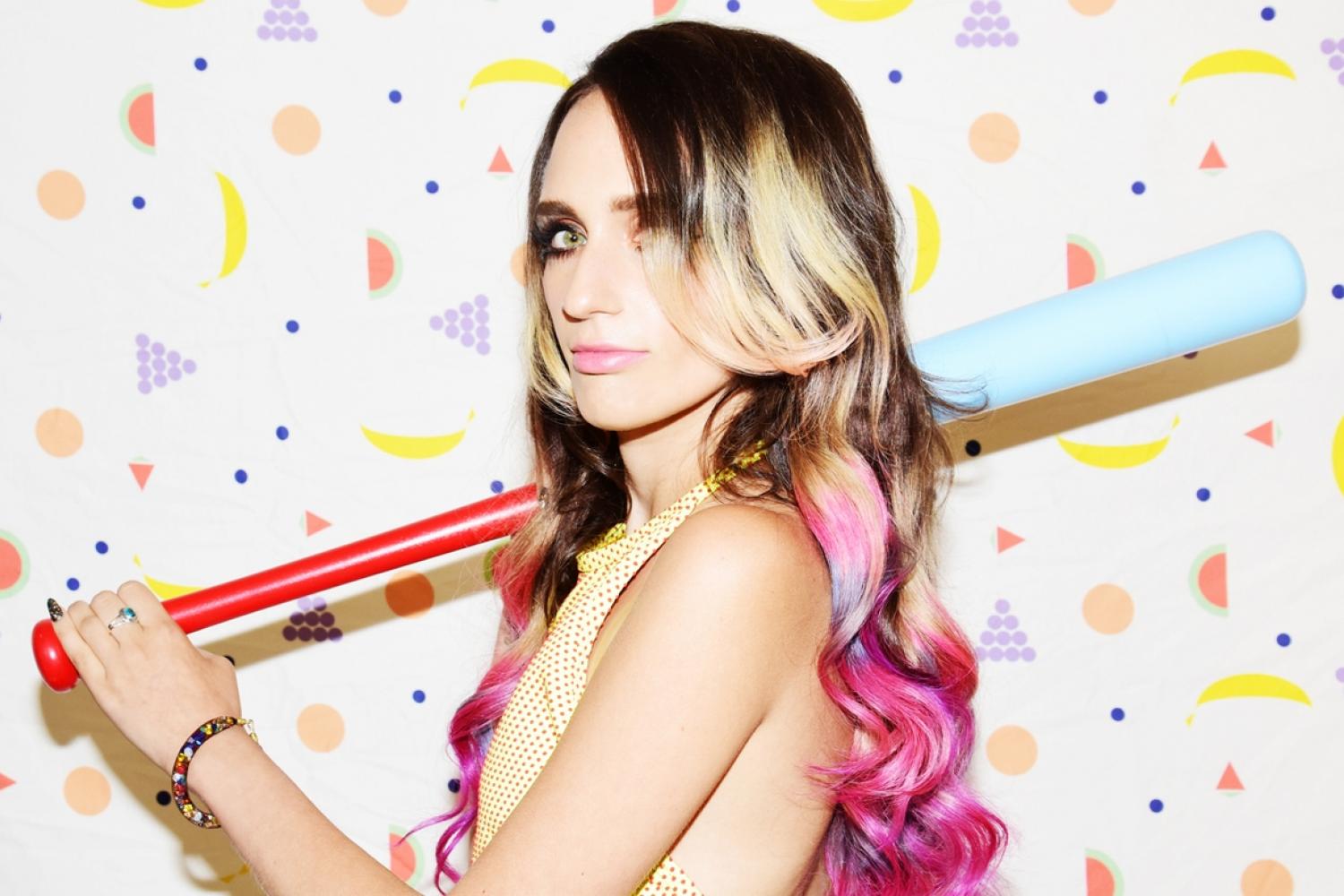 First introduced to the music scene as the front person for Boston rock band Speedy Ortiz, Sadie Dupuis has never been one to shy away from being heard. The release of her debut solo record Slugger, under the clever moniker Sad13, shows Dupuis dealing with the constant chaos of our world by finding the positives in friendship, empowerment and being the most authentic version of yourself. Released in the wake of the American presidential election, Slugger could not have come at a better time. A record to help boost morale and reaffirm the importance of community in a world that so desperately needs it, Dupuis’ strength and passion rings true on each of the eleven tracks. Northern Transmissions spoke with Dupuis via phone in New York City from the offices of The Creative Independent to discuss the album and its significance in a time of such crucial importance.

Northern Transmissions: I wanted to congratulate you on the release of Slugger. I’ve listened to it a few times already and love it. I was reading over the press release for the record and I love how you emphasize that you want this record to be about women and friendships, empowering each other and building each other up. Is that what pushed you to release something under your own moniker, away from Speedy Ortiz? Did you feel driven to say something?

Sadie Dupuis: I think it’s kind of coincidental timing in that the things that have mattered most to me in my life in the past few years have certainly…you know, I’m getting old – well, I’m not that old, I’m 28. I think at some point, centering my friends in my life above other parts of it…my friends became my priority and I think my music started to reflect that around the same time that I happened to make this solo record. I think there are themes and subjects that are projecting on this record that certainly pertain to my experiences as a woman or things that wouldn’t be representative of my male bandmates in Speedy Ortiz. The timing is a happy coincidence because I knew I wanted to make this solo record and the things that I was most interested in writing about happened to skew more towards celebrating my friends and celebrating empowerment and loving yourself.

NT: I was going to bring up your friends because you’re close with so many talented people. Everyone from Charlotte Zoller to Shamir, Sam Evian to PWR BTTM. How do you take influence from exceptional humans that just so happen to be your friends?

SD: I think I’ve become friends with a lot of the people whose work I admire. I ordered the PWR BTTM tape from Miscreant Records two years ago or something. I was sort of familiar with their music before that but I was really blown away with the tape and then I saw them play a bunch of times. I think a lot of the people I become friends with have just been from reaching out to other artists who I think are either likeminded politically or whose work I’m really impressed by. Feeling the need to use whatever platform I lock into to further my friends reach or people I think are doing important things that have more of a reach than I have. People talk about how the Internet changes things but I was born in the late 80s and grew up on message boards and in chat rooms and using the Internet until 5am. So it’s kind of no surprise that the friendships I’ve made have started on Twitter or Instagram or started from emailing bands that I think are amazing just to ask them questions about their process. I think a lot of people who are artists who, 10 years ago, might have felt isolated and alone feel very supported by a community of likeminded artists thanks to being able to find each other through Twitter or whatever.

I know people are very wary of the cult of personality that comes along with social media use and fandoms. Maybe it’s optimistic to say but I think most people have become less interested in artists that don’t have some kind of ethical prerogative to their work. I feel like being able to so transparently see what the values are of a musician that you admire can really deepen that respect. PWR BTTM, for example. In their music, you can get a sense of the politics by which they operate but also the fact that they use their platform to signal boost lots of other artists or charities. That’s always inspiring and exciting to me and those are the kinds of people I like to be in a community with. People who care for others and care about the world. I think it’s become a lot easier for those of us who feel that way to find one another, thanks to Twitter.

NT: I’ve followed you on Twitter for a while now and even before this interview, I felt a connection to you already because I knew what you were about and you have a great social media presence. I read an article on The Creative Independent the other day about sad girl Twitter accounts and how you feel a sense of closeness to those people because they’re genuine. Especially with your favourite musicians, you want to know that they stand for something.

SD: I fucking love that! Charlotte had her first piece for The Creative Independent go up recently and it’s with Amy Rose Spiegel who’s another one of these people I was a fan of. We’ve been Internet friends for a little while and then she came to a Speedy show this year. She had just written her book Action: A Book About Sex and she gave me a copy and I read it on tour. A lot of the book deals with affirmative consent and respecting people in a sexual partnership, respecting yourself as a sexual person. I just really felt that the book was exploring similar themes to my record, even though we had written them both entirely separate from one another so I was like “Hey, will you write my bio?” If it wasn’t for tour, I would never have met Amy Rose and had I not met her, she wouldn’t have given me her book early and if I hadn’t read her book, I wouldn’t have asked her to write this bio. It’s nice how these small connections of likeminded people lead to further collaborations and community building.

NT: You recently moved to Philadelphia which has a super diverse and inclusive music scene. What has been the best part of living there, so far?

SD: The rent. I’m just kidding. I don’t know if I am kidding. I moved there partially because there were so many bands there that I already loved. Maybe that’s a silly reason to move to a city but playing music is my only profession at this point and I love going to shows. It’s nice to be in a city that I’m so often inspired by the shows that are put together and the artists that come out of it. I wouldn’t say I’m a part of the Philly music scene because I’ve only lived here since March and I’ve been on tour for almost all of that. I haven’t really been playing house shows but it’s been so cool to just be an attendee at a lot of these shows and get to find out about all these new bands that I just think are pushing a lot of ground, both in terms of their music and in terms of what they stand for. It’s been a really cool place to live. I love it.

NT: You are signed to Carpark Records which is a great label full of talent like Greys, Beach House, Skylar Spence, Toro Y Moi. How is it being a part of that family? It seems like a very solid group of people.

SD: Greys! Shehzaad is the best. I love that band. I’m a fan of so many of Carpark’s artists. I really love the band TEEN. It’s three sisters and another one of their friends. They’re such a fucking weird band. They covered Gary Numan the other night, which was totally appropriate of them to do. They kind of sound like Devo sometimes. They sang choral, classical music as kids. It’s really weird, well composed, technically difficult music that’s also really fun and they all sing in four part harmonies. The front person Teeny has amazing dance moves on stage and she’s also doing a million things at once. They’re a really good Carpark band that I just saw a few nights ago and they’ve been on my mind.

NT: You have your own unique sense of style and fashion. You are very femme in your presentation and love bright colours, fun makeup and lavish hairdos. Where have you taken the most influence from in crafting your individual look?

SD: I take inspiration from a lot of different styles. Identifying as a woman, I often feel alienated by male dominated scenes. As a woman in a band, I felt like I had to dress and carry myself in a masculine presentation to avoid annoyances and the underestimating comments of “Wow, I didn’t think you’d be that good!” I love to dress over the top and feminine. I love cosplay and makeup. I did a lot of theatre in high school and loved doing stage makeup. Cosmetics is its own art form. If I’m going to be the only woman on stage, I want to be really fucking feminine so that young girls who want to dress feminine won’t feel shut out from a genre of music that’s for masculine people. I love to wear wigs and wild makeup – two things that I probably wouldn’t get to do at a day job. Gender presentation doesn’t have much to do with personhood. One activity does not define all that you are. Gender identity doesn’t dictate how you dress nor does your genre. As much as women have been shut out of professional realms, there are plenty of creative presentations that men haven’t felt access to for fear of being judged, which is very limiting. It’s cool to see public perception change.