Interview with Elaine Edenfield of Warehouse 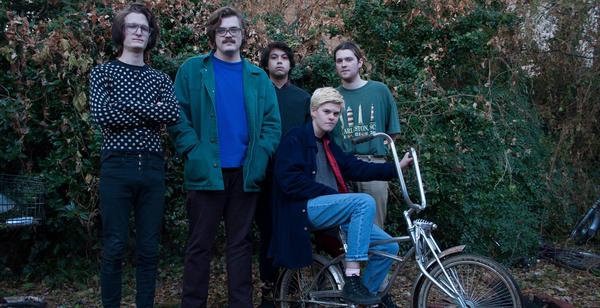 Warehouse has just come off a US tour with Frankie Cosmos and is changing gears. Super Low, the band’s second full length album, is expected to be released September 30th. Elaine Edenfield, the lady behind the vocals of the “classic Americana futurism” band, spoke with Northern Transmissions from her home in South Atlanta.

NT: I’m excited about the album coming up! How many more days? I like that you guys are counting down the hours on your Facebook page.

NT: Your other album, Tesseract, was self produced. Who’s producing this album?

Elaine: Bayonet Records. But it wasn’t always Bayonet. We took it somewhere else and got the final recordings back but we weren’t really happy with it. Something sounded off. So we took it to Bayonet and they kindly asked us to re record it, which we did, and we really liked it in the end.

NT: Did that throw off the timing of the album?

Elaine: Yeah. Well, I lost my dad during the process so that also threw it off a little bit. We don’t really have a manager right now so me and Ben were kind of trying to do everything ourselves. But it’s finally coming out September 30th.

Elaine: Yeah, we also have another single coming out soon. Honestly, I’m not really sure when, but it’s before September 30.

NT: How was touring with Frankie Cosmos?

Elaine: It was great! We’re trying to get another little east coast tour in October started.

NT: Nice! I’ve been noticing a lot of bands have been heading over to tour in the UK. Any plans of that?

Elaine: Well we’re actually talking to Frankie Cosmo’s UK booking guy and trying to get over there. It’s funny because on our stats on Bandcamp, our highest concentration of listeners come from London.

NT: That’s funny to me. Another Atlanta band that I’m friends with has a huge listener base in Brooklyn. It’s funny how that works out. Even though your listener concentration is high in London, would you still call yourself an Atlanta band?

Elaine: Yeah. It’s weird to me though. When we tell people we’re from Atlanta, they ask us if we have running water here.

NT: Do you have a favorite Atlanta band?

NT: Awesome. I am really looking forward to this album. Thanks so much for talking with me!