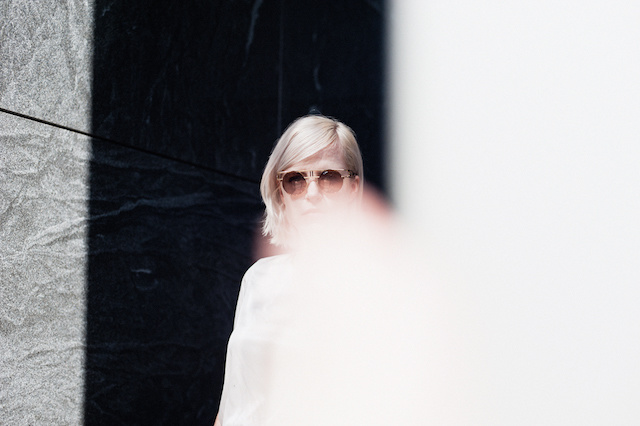 Dutch musician Annelotte de Graaf is poised to drop her debut album Fading Lines, under the moniker Amber Arcades, in June of this year and has already enticed listeners with the release of two dreamy singles. While the music of Amber Arcades is soaked in an ethereal, lo-fi vibe, Annelotte’s life outside of music is deeply rooted in reality. With a master’s degree in copyright law under her belt and a day job spent working with Syrian refugees, she is an intelligent and interesting woman. Northern Transmissions caught up with Annelotte in New York City to learn a little more about the artist prior before Amber Arcades takes the world by storm.

Northern Transmissions: You are a native of the Netherlands which is a relatively small country. What’s the music scene like over there? Does the small population increase competition or encourage a community feel?

Annelotte de Graaf: I guess both. I’ve thought about this a lot. Like you say, it’s a very small country so everyone pretty much knows each other throughout the country. I think the scene is mostly based in the bigger cities like Amsterdam, Rotterdam, Utrecht. That’s where most bands are, and then there’s this whole other scene more in the north of the country right now with these young folks from these really small villages who are kind of building their own scene there, which is pretty cool. In general, there’s small scenes but everyone knows each other between that. It’s definitely true that because it’s such a small country, the market is relatively small. There’s a limited amount of places that you can play and a limited amount of festivals. It’s generally pretty hard for Dutch bands to do anything outside of Holland. I do feel like that increases the sense of competition which kind of sucks. I do my best to not think of it in that way.

NT: You don’t want to pit yourself against other people.

NT: Have your experiences with the Netherlands music scene been a positive thing for you?

AG: Yeah, it has ups and downs. I think the fact that it’s so isolated also makes it easier to start up as a band and get a lot of experience before you get noticed anywhere outside of the Netherlands, so you have quite a long time to prepare your act and get it together so that’s totally good. On the state level, things are pretty well arranged so there’s a couple sub-cities that you can get as an artist. It’s getting less nowadays though unfortunately, but there’s still some stuff available for touring or writing if you play well. I guess that’s a benefit that there is living in the country with the slightly more socialist states. There’s cool places to play as well which is good too.

The biggest music festival is called Lowlands. I don’t think it’s as important nowadays as it used to be but it’s still the main event every year that the most musicians go to. It’s a very broad lineup. There’s smaller, more niche kinds of things. Some of my favourites are Le Guess Who? in Utrecht, Best Kept Secret and this small festival on an island called Into The Great Wide Open. There’s a bunch of pretty nice festivals.

NT: Your debut album Fading Lines is coming out June 3. Your previously released tracks “Turning Light” and “Right Now” have already received excellent praise. How do you feel coming into its release?

AG: I’m very excited for it mostly. The recording we did last year in May of 2015 so it feels like such a long time ago already. I’m just really excited to finally be able to release it. I’m kind of nervous, of course. This is my first full length album that I’m putting into the world so it’s kind of exciting wondering how it will be received. I’m more excited than nervous.

NT: What do you hope people take away from the album, if anything in particular?

AG: That’s a tough question. Do you mean emotionally?

NT: Yeah, emotionally. When they listen to it, how do you hope people feel?

AG: I don’t know; I don’t really think about this when making music. But a lot of people have said to me that it makes them feel a weird mixture of melancholy mixed with a blissful feeling, so kind of sad and inspired at the same time. I think that’s a good description of it as it’s a state that I find myself in a lot too so it might have an influence on the stuff I write. I like being in that state most of the time, so I guess it will be a good state to take away from it.

NT: You recorded the album at Strange Weather Studio in New York, which is a location that you were so set on that you actually spent a great amount of money on just to fly to the city. What was it about New York that intrigued you so much?

AG: It wasn’t a conscious decision to go to New York. I first decided on which producer I was going to work with, and then the producer I chose to work with just happened to be based in New York so that’s why I went there. I love New York too so that was an added bonus that I was going there. I also have so many school friends living there so it all just came together very nicely that my producer happened to be there and my friends happened to be living there who played on the record. The energy of New York is just amazing. But I haven’t been to that many places in the US yet, I’ve only been to Philadelphia and New York and I was in Texas this March. I’m not sure if that energy is New York specific or if it’s more of a US thing.

NT: New York is such a creative city. It would be hard not to feel inspired being there just because there’s so much going on.

AG: So much. Every night I was there, there were ten amazing shows you could go to. For every one you would go to, you would miss nine others.

NT: Your producer on this record was Ben Greenberg, who has previously worked with artists such as The Men and Beach Fossils. What was it about Ben that made you realize he was the right match to work with?

AG: I was talking to a lot of friends about which producer I should go for and one friend who I really respect, this older journalist who has a lot of big opinions, said that I should go for the one who gets me out of my comfort zone most. I thought that was good advice because a lot of the bands that I listen to are not very smooth, poppy bands. The music I write, in essence, are pretty sweet, poppy songs but I was looking for a way to get out of my comfort zone and get those poppy songs into more challenging production. That’s how I ended up with Ben because he had worked with all of these hardcore punk bands from New York. When I started talking to him about the album and where I could see it going, he started giving all these references to old, weird stuff and bands that I had never heard of. I knew that would definitely add something that I wouldn’t think of myself basically.

NT: That’s great advice to follow, especially for your first album. Back to the topic of North America, you played SXSW this year. How did the reception of the crowd fare to that back home in the Netherlands?

AG: That’s hard to say. SXSW is like a madhouse. It was really fun and definitely a really cool experience but musically, as a band, you don’t really play your best shows there most of the time. Everything is so tightly scheduled. You have, at most, fifteen minutes to build up, line check and that’s it. You’re working with all these people you don’t know, the sound guy you don’t know and you’re just thrown on the stage, plug in and play. It’s super hectic. I saw a lot of shows from other bands too where their equipment didn’t work or there were major sound issues. I really think that no band really plays their best shows at SXSW.

Under the circumstances, it went good. We were just surprised that even any people showed up. We had never played any shows in Texas before, so that was pretty cool that there were people there who seemed to enjoy themselves.

NT: Outside of your music, you are an extremely interesting woman. You have a master’s in copyright law and you’re currently working in human rights law to aid Syrian refugees. I know it’s not something you can disclose too much information on, but how have your experiences with the UN translated into your music and influenced you as an artist?

AG: It used to more than now. When I just started writing music, I was really into writing about these big themes that I had gotten from my studies. I was most interested in criminal law back then so all these themes of free will and punishment and these major, philosophical themes that I wanted to write really heavy stuff about. As I’ve grown older, I’ve started to let that go a little bit more. I guess now I mostly write about my own experiences and thoughts and more in a stream of consciousness kind of way. That’s how I approach lyric writing now. It’s not as direct an influence now as it used to be.

NT: I think that’s smart because now you have a balance of the two worlds. You have your music that can be a total separate release from the heavy stuff that you work with daily.

AG: Yeah exactly, that might be true. It’s definitely nice to have a balance of the two worlds. Sometimes it kind of feels like I’m living this double life because there’s no relationship between the stuff that I do. It’s actually kind of nice because making music is awesome but the music world is very particular and it’s very isolated from the rest of the world. Engaging in my day job just makes me more aware of the other stuff that’s happening in the world besides new releases and other bands and gigs.

NT: Are you planning on doing a fair amount of touring for the album?

AG: Not so much. We’re doing a small European tour and then a bunch of festivals in the summer but the festivals are mostly on the weekends so I’ll still be able to go to my job during the weeks.

NT: Do you plan to come to North America at all?

AG: I want to but it’s so hard. I’m so in love with America so I would love to tour there but for non-American bands, it’s quite hard to be able to play shows there because you need a work VISA and it costs a couple thousand dollars, usually takes about three months and you have to be able to show them that you have a year’s worth of shows booked ahead. It’s a challenge but as soon as the opportunity arises, I will definitely go for it.