I’m In You Release New Song And Video 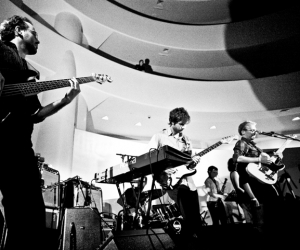 They released their first LP, the apocalyptic disco album War Dreams, in 2008, which lead to shows at New York clubs the Mercury Lounge and Cake Shop. The record captured the attention of Interpol’s Paul Banks, who invited I’m In You to be the opening act on a one-month US/Europe tour for his solo project Julian Plenti in the fall of 2009. The band played in Los Angeles’ El Rey, New York’s Bowery Ballroom and Guggenheim Museum, London’s Scala, the Melkweg in Amsterdam, and Milan’s Magazzini Generali.

In 2010, the band released its self-titled second record, which deepened the band’s experimentation with musical texture by adding a string section, bassoon, industrial percussion, an array of vintage synths, and backing vocals.

In the fall of 2012, I’m in You finished their third full-length album, Trust, an exploration of 80’s art rock, r&b and funk. Trust is a re-imagining of the music of the band’s formative years (Duran Duran, INXS, Roxy Music, Peter Gabriel, Kate Bush, and David Bowie), along with an increasingly direct approach to songwriting and production. The record alternates between romanticism and nihilism in conjuring a mythical and nostalgic echo of the band members’ early experience of rock music.