9 months ago
Words by Jahmeel Russell 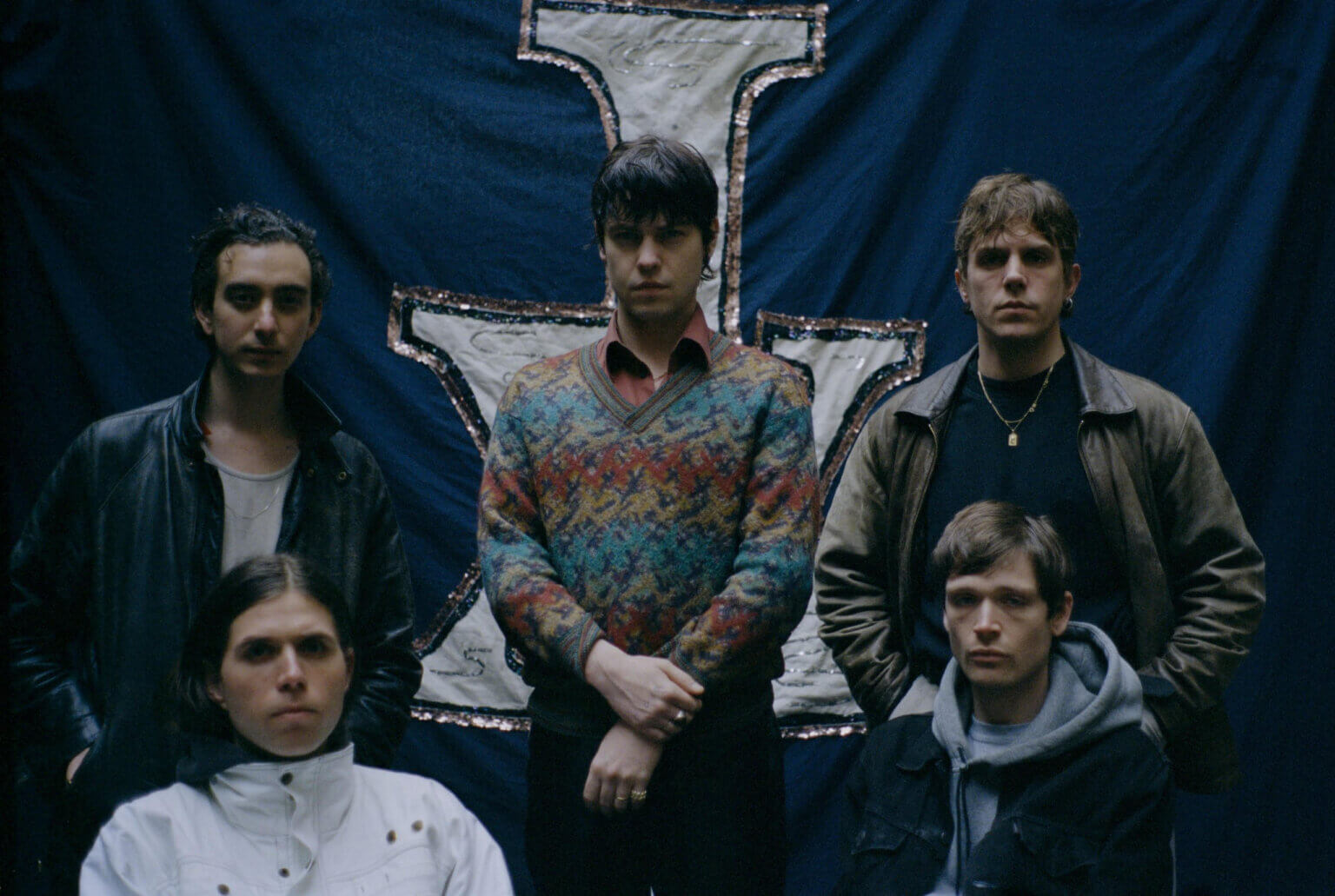 Denmark’s Iceage continues to push their sound forward in an impressive fashion. Starting with their more aggressive early work, they’ve gradually included more melody and additional instrumentation to their sound while simultaneously opening up musically to incorporate a wide variety of styles to their compositions. Their new album Seek Shelter is arguably their strongest work yet. I had the pleasure of speaking to bassist Jakob Tvilling Pless about their process…

NT: This album marks another evolution in sound from the band. Before you compose songs for a new album is there much talk of direction or would you say the musical changes have come about naturally over time?

JTP: I don’t think we ever really talk about what direction we want to go. Everyone has small ideas, and we just meet up in the rehearsal space and start putting stuff together and it just comes out the way it comes out. We don’t really have a predetermined idea of what anything should sound like before we start making it. But I think, I think that’s usually we’ll all try to make something that we haven’t made before. It wouldn’t be interesting to us to do the same thing over again. So so in that way, yeah, I guess we always try to move in a new direction.

NT: You worked with a producer for the first time on this record. What made you decide to work with Peter “Sonic Boom” Kember?

JTP: We were looking for places to record in order not to become distracted by being in your own city. You know, you wake up in your own apartment, and all of your friends and family are here. So we always try to get away from Copenhagen, and we looked up places in Portugal. We read an interview that someone did with Peter Kember, Sonic Boom, in which he mentioned that he wanted to work with us, and we just got in touch with him. So that’s the way that that ended up happening.

NT: Are you fans of (Peter Kember’s band) Spaceman 3?

JTP: I’ve been listening to Spaceman 3 ever since I was 13 or something. So yeah, you could say that. Also, it seemed like an interesting choice just because that’s a very specific sound that he has, and we just figured it will be interesting to see where that will take us sonically.

NT: What did Peter bring to the table with his production? Did he get involved in the arrangements or melodies of the songs?

JTP: Not so much arrangements, but he was just really good. He didn’t try to interfere at any point when we seemed to have a clear idea of what we wanted to do but he was very good at just having small inputs. Sound-wise, if we ended up in a situation at any point in the recording where we didn’t really know where to take something sonically, he would be very quick to step in. He had a lot of good ideas on using effects and he wouldn’t be too dominant on anything unless we really asked for his help. Apart from that, he was extremely good company, which is also a good thing when you’re recording because we ended up being in the studio for 10 days, and you don’t want to sit in the studio all day with someone you can’t get along with.

NT: Did he bring any of his own personal gear into the studio?

JTP: He brought some really cool stuff. He had a bunch of effect units, pedals, and he brought that old Vox guitar that he used for the Spaceman 3 stuff that has this tremolo on it and it sounds great. So he got to use a lot of his equipment.

NT: What about the extra instrumentation on the record? Was that something that you had planned out or was that another thing that he brought in?

NT: Was there ever a moment when you thought, maybe we don’t need this extra instrumentation?

JTP: I guess in some cases we tried out stuff that we ended up not using, but for the most part, you get so excited because as soon as you add horns to a song, it kind of takes it to a new place. It gets you excited when a new layer is added to your music and also after listening to the recordings for so long. For the most part, I’ll end up being happy with having a new layer added to it.

NT: How did the Lisboa Gospel Collective end up singing on “Shelter Song”?

JTP: I think that was (vocalist) Elias’s (Bender Rønnenfelt) idea. He had mingled with that idea beforehand. When we got to Lisbon, we tried to get in touch with the collective and they were very quick to respond and said, okay, we’re gonna send you three of our people. I was really surprised by how well Elias was singing this time. He’s gotten a lot better and as soon as those guys came and started singing on top of it I said, Elias, you’re not that good anyway.

NT: [Laughs] I was gonna mention to you, Elias, his singing on this record from a technical standpoint is probably the best thing I’ve ever heard him do.

NT: Yeah, he’s fantastic. The first album, up to this point has always been my favourite and I actually love the sort of raw off the rails vibe that the whole band had. His singing worked so well on that record but I think he’s transformed himself as you guys have transformed the music.

JTP: Yeah, thanks man. I’m happy you say so.

NT: After over 10 years as a band you added guitar player Casper (Morilla) to the lineup. Why did you feel now was the right time to add a fifth member?

JTP: For a couple of tours, we had a saxophonist, and we had a violin player. Just to kind of add to our sound but for a long time we always played together in such a chaotic way that it never seemed possible for us to have someone kind of get in there and play with us. I think we just felt the need to fill out a hole that we never knew was unfilled. We knew Caspar from before, he plays in a band called Less Win and he’s always been a friend. When we asked him if he was down to play a couple of shows with us, he just said yeah, he’d be down to do that and as soon as we started rehearsing with him he’s a very creative guitarist and he just fit right in. We feel he is going to be stuck with us for a while sadly.

NT: Well that’s fantastic to hear. Does that free you guys up to bring in some other instruments to play yourselves? I saw a YouTube video from last year and there are keyboards in the lineup.

JTP: Oh yeah, we did that specifically for a live session. It’s not a usual thing we’re gonna do from now on, but I think it really gives Johan (Surrballe Wieth), the other guitar player, some freedom to kind of do some things he hasn’t been able to do until now and it opens up what you can do in a live set having him on board.

NT: It’s an extremely long way from “White Rune” to “Shelter Song”. Are you ever surprised at just how much the band has evolved musically over time?

JTP: We tend to not listen back to stuff we did before but then recently, it was the 10th anniversary of New Brigade and we were all sitting together by coincidence and we listened to it. You get surprised to see looking back how much stuff just changed and evolved. So yeah, I’d say so.

NT: For a lot of musicians the music they heard growing up tends to stick with them as they mature. Were there any artists you heard as a young kid, maybe from a family member that has informed the writing on this new album?

JTP: In some way, I’d say everything you listen to throughout your life can inspire you in some way or another. Sometimes you won’t even know it but I’d say everything I listen to kind of has an influence on what comes out in songs that you write. I wouldn’t pinpoint anything specifically but my parents always listened to music and that kind of gives you a direction as a kid and what you start listening to. Then again, the first CD I ever bought was a Scooter CD. I don’t know if you know Scooter?

NT: No I don’t actually.

JTP: It’s Dutch Euro-dance. I couldn’t say Iceage has been too marked by listening to Scooter.

NT: The reason I asked was that in this record, in particular, I hear some classic artists in the sound of some of the songs, like the Stones.

NT: It’s not like you’re sitting around, oh, we’re gonna write a song exactly like this song from that record.

JTP: No, not at all, but then again, I had a couple of times trying to figure out how to play some specific song and then not being able to actually figure it out and that becomes a new song. So sometimes you have a direct link to another song in one of your own songs.

NT: Do you ever see the band returning to its more aggressive origins or have you left that far behind?

JTP: The way that we used to play, it didn’t really leave out much space for experimentation in doing stuff with other instrumentation and stuff. So I think, for now, that that is all part of the past, but we’ll see what happens in the future maybe. I mean, we never really make any plans on what we want to do.

The new album by Iceage, Seek Shelter is out May 7th on Mexican Summer. CD and vinyl are available to order here