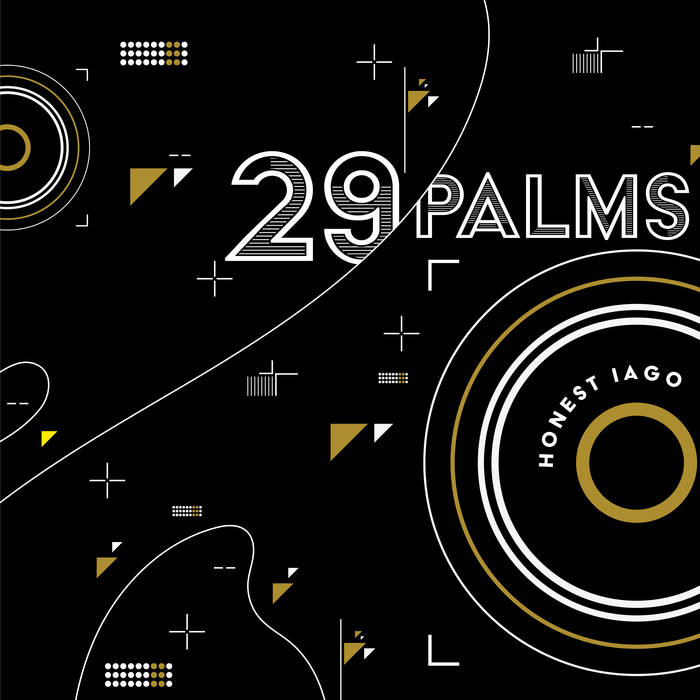 Honest Iago (pronounced “yah-go”) formed in San Diego in 2005. The band maintained a rotating membership of musicians and visual artists to ensure no two experiences would be the same. The lineup solidified to the quartet of Matt Fradkin, Nick Norton, Craig Vermeyen, and Hunter Knight to release their 47-minute debut, Straight On ‘Til Morning, in 2009.

To follow up Straight On ‘Til Morning, the members went exploring and began collecting ideas for a second record. With the four of them living apart at various times in Los Angeles, Seattle, London, Edinburgh, NewYork, San Diego, Paris, Oakland, and the middle of nowhere, songs began to take shape through bedroom recordings and email chains of tracks and lyrics. Ahead of proper recording, Matt and Nick spent time on Lake Pend Oreille in northern Idaho hashing out the band’s collected ideas. Soon after, the band holed up in a cabin outside of Joshua Tree to finish writing the second album, 29 Palms.

Recorded and produced by Nick Tipp (The National, The Decemberists, HEALTH), 29 Palms is slated for release on July 27. With members now spanning the entire west coast of the US, more music, travels, and tales are on the way.

29 Palms is the result of over a decade of music making and friendship between four people who have all grown up in very different ways. From all of our endeavors, all the successes, failures, and travels of discovery we all took away different things but ended up at the same conclusion: if more of the world understands that if we create more and destroy less, we progress. At some point each of us was driven by ego, or money, or fame, or lust. Somewhere along the line each of us realized that what is really important is what we’ve had all along: our friendship, time spent together doing what we love, and how that leads us to create. The variety of musical styles and lyrical content on 29 Palms come from our different journeys, but it maintains a cohesiveness you can only achieve through respecting different paths and lifestyles and learning from each other what really connects us all. We won’t be fooled by those ideas or forces that seek to destroy or break people apart. We are going to create, we are going to rock, and, most importantly, we’re going to have fun doing it. Together.

Ahead of it’s release the band is streaming 29 Palms exclusively on Northern Transmissions.