Holy Fuck, recently released their new single “Luxe.” The track started out as a spontaneous jam session as the encore at a Luxembourg show. Once the early elements of the song had been worked on in the studio, they sent it to their good friend and casual musical mentor, Kieran Hebden, aka Four Tet. With the songs’ many layers of information and frenetic rhythms the band then figured it would work with vocals from Alexis Taylor from Hot Chip.

“Among more literal translations, Luxe is the short form of Luxembourg – the city in which the nexus of the song was created. During our European tour supporting our Bird Brains EP, we discussed how the band had drifted away from doing more experimentation on stage, how we missed creating something new, from scratch, in front of an audience. On this particular night during soundcheck we had a pulsing minimal synth loop we’d been tinkering around with (we were listening to lots of TRAX Records stuff on that tour). We decided if we got an encore we’d go for it. Luxe was the result, or at least the MP3 we had recorded at the sound board, then called ‘Luxembourg Encore’, was the result.

Once home from tour we took the demo back to the drawing board and made a proper song from its initial form and idea. However, before we got that far, somewhere around checking out of the first studio, while still referencing our ever growing folder of sound check ideas, we shared everything with Kieran. His always-intuitive advice was to ‘push away’ from some of the ‘very indie rock sounds’ and that his ‘favourite thing here is Luxembourg Encore… There are so many cool moments… It could be a good club track.’

The next moment of discovery came when Graham suggested the band scrap Brian’s vocals and to give it to Alexis Taylor of Hot Chip. When we presented Alexis with the concept, our reference notes to him, based around Brian’s temporary vocals, were ‘like an old sample you’d dig up off an old folk record… and approached more like a classic house track’. He responded, ‘we could try to record the vocal in a Voice O Graph booth (an obsolete 1940s coin operated phonograph booth) if we can access one…’. As far as we’re aware, there are only 2 in the world – one in Liverpool (that apparently doesn’t work anymore) and the other in Third Man studio in Nashville, where he sang ‘I’d like to scrap all of this and start over again.’ Fittingly it was New Year’s Eve.

Thankfully all these steps never veered from the original path set out on stage in Luxembourg. Everyone’s commitment to the song, everyone’s input, proved the importance of a collaborative process and reinforced the notion that good things come from daring experimentation.” 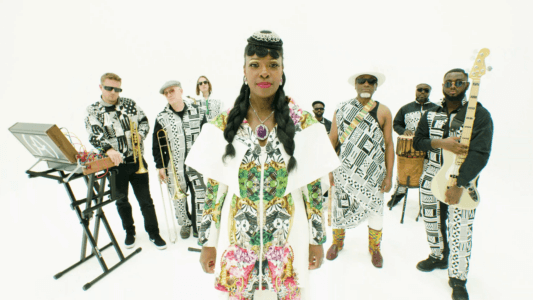