Holiday Friends build from the ground up 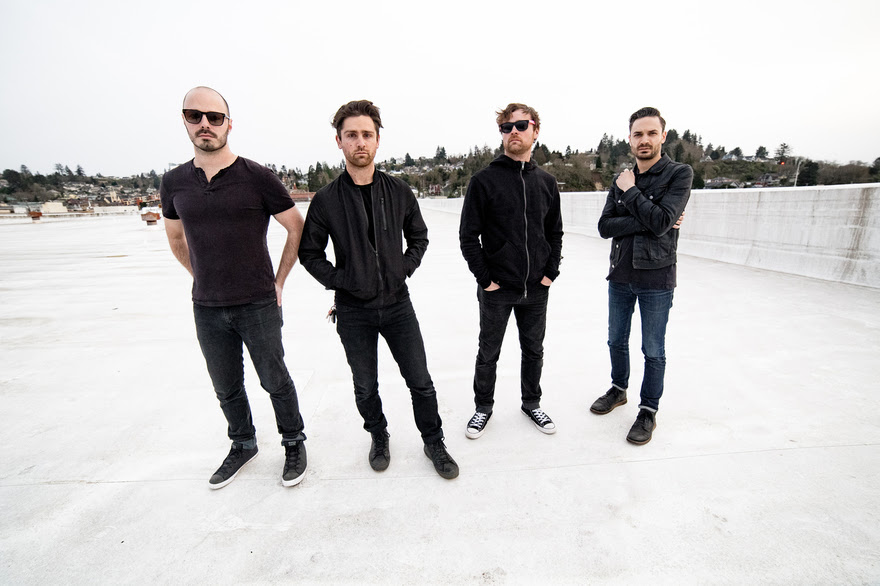 On Night Terrors, Holiday Friends are taking control. The Oregonian four-piece built their own studio in Portland to record their newest album, and the blood, sweat, and tears involved are easy to hear. Their music is infectious power pop with a dash of 1980s keyboard flair, perfect for late night bedroom dance parties and beach beers under the summer sun. We talked to singer, guitarist, and songwriter Scott Fagerland about the band’s studio experiments, their biggest influences, and the meaning behind the album’s evocative title.

NT: Tell me a bit about what went into making Night Terrors. How did it come together?

SF: I think this record is unique for us as a band because it’s the first one that we engineered and produced ourselves. It opened up a world of wanting to have more control over the parts that we played. We didn’t have the best equipment, but we just focused more on the performance of every part and we were able to do that by having unlimited studio time, which you normally don’t get when you’re an indie band. That was the biggest unique thing about this record.

Besides that, this was our first time as a four-piece band. We had another songwriter and keyboard player who left after the last record, so this was kind of a transformation for us.

NT: Your band’s lineup has changed a bit over the past few years. Do you feel like you’ve found a group that really works for you?

SF: Yeah, absolutely. I think this group feels the most natural it has since we started, if not ever. It just feels like we finally settled into a groove where we’ve got four people living in the same city for basically the first time since the band started in college. We’ve just got a better direction and a better sense now of the kind of music we’re making.

NT: I read in an interview with the Daily Astorian that the album’s title refers to some actual night terrors that you experienced about the band’s future. How did that struggle inform the record?

SF: In the last few years, there’s been a lot of growing up for us as individuals, and also as a band. Just realizing more than ever the struggle to keep music going as a side project to life, you know? I had a lot of stress about it, and it really just informed a lot of the lyrics on the album. I kind of write my lyrics after I write the music, usually. It’s hard to describe how that works in the band, because the song starts with a lot of emotion and feeling, a lot of feelings of uncertainty and doubt. That informed the emotional part of the music, and the lyrics came naturally after that. It came through on a lot of the songs — not all of them, but definitely a few.

NT: Listening to Night Terrors, I’m hearing the fingerprints of a lot of other artists. Who are some of your biggest influences?

SF: There’s a ton. We were just listening to and absorbing everything. I think the fact that we were engineering it this time around, we were getting influences on the production side of the record, which I thought was better than songwriting because in the past I’ve struggled to not sound too much like other bands. You’ll just become obsessed with a sound and then you’ll write a song that sounds just like that. But with this record, it was more like the sounds were our own, but were like, ‘how do we want to approach this in the studio?’

We got all these inspirations from contemporary artists. I was listening specifically to The War on Drugs, I was listening to Local Natives, and I was also listening to a lot of mainstream pop, like Justin Beiber. You hear that sound, and there’s a lot of specific parts on the album that have that kind of pop production, you’d sample a voice and play it through the keyboard and have this shimmery, autotuned vocal in the background.

NT: This is the first record you guys produced yourselves. What inspired that decision to switch from working with other producers?

SF: Mostly it was budget and time. We got frustrated with how we did records in the past. We established friends and worked with producers who were very reasonable, so it’s not anything against them. But you find out that you’ve only got X amount of dollars and you have to do everything in a few weekends, take some time off work and do it on the weekdays. With this record, we just wanted to have fun and have control over that, so it just made sense to invest in some recording equipment. We had dabbled in the past, making demos, so that made the transition a little bit easier. But we definitely had to learn a lot and buckle down.

NT: What was it like working in your own self-made studio versus working in studios built by other people?

SF: I could say that the benefit is having more time, but I could say that the problem with it is not having the experience as engineers to really know how to get the sound you’re looking for, or get the sound you didn’t know you were looking for. So we definitely struggled with that, but if anything it made us more critical of how everything sounded. We probably re-recorded parts many times because we didn’t want to just go with the first thing. We tried to be as critical as we could about the production of it without having any concrete experience in producing an album.

NT: Did you have any moments in the studio where you found the perfect sound, or the perfect instrumental part for a song?

SF: Yeah, definitely. A lot of times it was just through experimentation with effects and mic placement and everything. Specifically, the intro to “Heartbreak Kid,” I had been messing around with all kinds of noises, I wanted it to start with this kind of swell, so I recorded a dryer, I recorded rain falling on the roof, and I was getting kind of out there. Then one day, we decided, this sound like an Animal Collective record, and we didn’t want it to sound like that. We wanted it to be rock and roll. So we brought in this pedal — I don’t remember what it was called, some kind of super distortion pedal, and we just started messing with the knobs, and it kind of had the same feel as a dryer or rain coming down, but it was more in tune with the album. There was a lot of stuff like that.

NT: Do you find that that spirit of experimentation translates to your live shows as well?

SF: It does now, yeah, because we’ve got parts like that. When we created them in the studio, it was this one take of crazy noises that came from twisting the knobs, and you think ‘wow, I’m never going to be able to do that again.’ So now, when we practice or rehearse before shows, we try to figure out other ways to bring the same element to our songs, even if they’re not coming from the same instruments. We think, this might work better with a keyboard sound or even a vocal. We definitely experiment with our live sound now.

NT: What do you guys have coming up in the future? I know you have some live shows on the horizon.

SF: Our album release is June 23 at Mississippi Studios in Portland. We’re going to be playing with friends of ours, local bands, and then we’ve got a run of shows in July through the northwest.

NT: For someone who’s never heard you guys before, how would you describe your music? What’s your elevator pitch?

SF: I’ve always liked that we have an accessible sound. For me personally, I listen to experimental music, and I think it’s great for certain times of the day or times in your life, but personally I prefer the sort of sound you hear immediately and start tapping your foot or singing along to the music. That’s what we do.