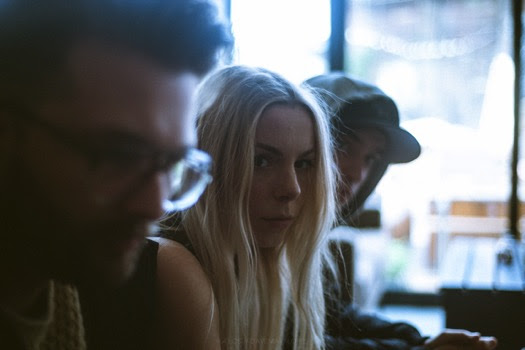 After the release of their recent full-length, Full Circle, via Matador, UK band HÆLOS have announced its plans to return to North America, for July and August tour dates. The band is excited to bring its live show to major festivals (including Lollapalooza, Outside Lands, and Austin City Limits) and West Coast markets this summer, and the full list of tour dates can be found below.

On their debut album, Full Circle, HÆLOS’ rippling electronic pop conjures the exhilarating privacy of a cavernous club’s dark pockets and the introspective comedowns that accompany rainy 5 a.m. cab rides. “It’s the music you put on after the club,” Lotti Benardout, who shares vocal duties with her other bandmates, Arthur Delaney and Dom Goldsmith, states. “You can still feel that energy and euphoria, but it might bring you back to reflect on certain moments or memories.”

Filled with catharsis, Full Circle is an embodiment of a sound that has been referred to as “dark euphoria”. Throughout the album, HÆLOS reconstruct the firmament of dance sounds past and present to construct an exquisitely elegiac mood that retains a sense of presence as it conveys the pain of emotional distance. Every moment of uneasy reflection is matched by quiet explosions—Delaney’s forceful shouts over yo-yo synths on Full Circle’s title track, Benardout’s layered pleas over Goldsmith’s cascading drum breaks on “Pray,” and the soaring “Separate Lives,” which hollows out drum’n’bass’ propulsive patter to form an atmosphere that’s as gently disruptive as it is emotionally nourishing. Throughout the album’s loudest and most peaceful moments alike, Full Circle retains a pristine intimacy thanks to Goldsmith’s keen ear for behind-the-boards magic; his touch gives the album a hermetic feel that stays with you long after it ends.