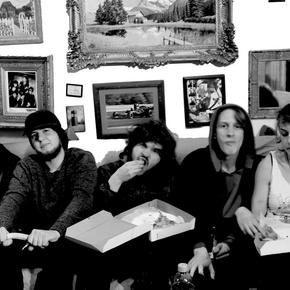 Two weeks ago the band shared the first taste of their upcoming album with the frenetic “Trash Bed.” Now the band returns with the abrasive dance track “Pink Elephant.”

Birthed from the depths of hippy-noise-punk-dungeon-slum-basements, Boston based rock outfit Guerilla Toss are a self proclaimed “blah wave” band that are serious like cocaine and silly like Ringo Starr. Considered to be a New England underground staple by the freaks and weirdos that inhabit the region, the band has released numerous recordings in the past two years on vinyl, cassette, and CD, on labels such as Feeding Tube Records, John Zorn’s Tzadik, Sophomore Lounge, and Digitalis ltd. amongst others.

Their newest record ‘Gay Disco’ is a concept album based around new wave and no wave dance music, extreme dementia, drug problems, and absurdist humor. However, in the midst of the chaos, it is clear that the compositions are well crafted and spout from the minds of educated individuals while avoiding the common esoteric pitfalls that could be associated with their sound. Kassie Carlson shrieks, rants, and raves like a cat in heat; guitarist Arian Shaifee shreds like Albert Ayler shooting his first speedball after rising out of the east river as a zombie, Simon Hanes plays bass like Bill Laswell if people still cared; Ian Kovac‘s synth lines are primitive, perfect, and wise; and Peter Negroponte‘s mutant drum set  grooves like James Brown being rushed to the hospital on an ayahuasca overdose.

Although young, sexy, sassy, and naive, Guerilla Toss have had the pleasure of opening for legendary underground acts such as Fat Worm of Error, Hair Police, Merzbow, Sightings, Black Dice, and more.