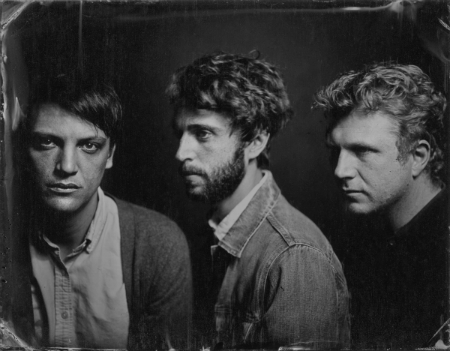 TwitterPinterestPocketRedditFacebookEmail
Grooms have shared the title track to Comb The Feelings Through Your Hair today. Like the previously released “Doctor M,” the title track showcases the new direction of Grooms with frenetic drums and swelling synths brought to the fore alongside Travis Johnson’s trademark guitar work. You can stream the track below. Comb The Feelings Through Your Hair will see release on the venerable Western Vinyl imprint this February 17.

Having lived, worked, and created in the ever evolving Williamsburg neighborhood of Brooklyn for over a decade, native Texan Travis Johnson has felt the direct impact of the growth and dissolution that comes with rapid gentrification.  His band Grooms practiced, and recorded at Brooklyn’s Death By Audio for seven years (first as Muggabears, then as Grooms) before they were forced out of their spiritual and literal home in November 2014 when DBA shut its doors.  A little over a year before, with the band’s income not providing enough money to support any of its members, bass player and co-writer Emily Ambruso went on hiatus from the band, leaving Johnson as the only original member.  Despite these unfortunate blows, Johnson soldiered on, soon recruiting Jay Heiselmann on bass, and actor/comedian Steve Levine on drums.

Travis Johnson’s relentless perseverance isn’t a central theme, but it’s worth keeping in mind when listening to the 11 songs that comprise the new Grooms album Comb the Feelings Through Your Hair, an album which marks a clear aesthetic and thematic departure from the group’s previous efforts.  After months of experimenting with sound collages, samples, and electronic beats, the band recorded an obsessively detailed and melodically complex album, with a heavy focus on mood and texture.  Unlike their previous album Infinity Caller (which Speedy Ortiz’s Sadie Dupuis called “…an exercise in explosion and restraint hallmarked by sweeping guitars, stuttery drums, and cryptic, airy vocals…”) many of the songs on Comb… bring the band’s rhythm section to the fore, and Johnson’s trademark guitar stylings often take a backseat to his psychedelic sample-collages and ambient electronics.  Fortunately the new approach works, balancing pop structures with masterful experimental production that shifts in tone and color in harmony with Johnson’s tales of acceptance, loneliness, and impotent violence.

Whether singing from a fictional or personal perspective, Johnson’s songs on Comb… are all loosely about letting go of bitterness and resentment.  Like the Brooklyn neighborhood where he lives and works, his internal real estate is constantly being reevaluated, razed, and rebuilt.  Fortunately his internal growth has yielded an album that attentive listeners will find relatable and consistently rewarding.

02. Comb The Feelings Through Your Hair

09. Grenadine Scene From Inside