Created and nurtured by Tom Russell, Jordan Wolowitz, and Yoni Reisman, three New Yorkers, The Governors Ball is the city’s only homegrown music festival and maintains a long track record of giving back to its community by working with, and donating to local organizations, non-profits, and community groups. Last year, the festival hired hundreds of local residents from East Harlem and the South Bronx, partnered with dozens of local NYC food vendors, and donated $10,000 to the Mayor’s Fund in support of the victims of the East Harlem building explosion.

You can watch 2014 Festival highlights below.

Below is a full list of Governors Ball’s philanthropic and community partnerships from 2014, which the festival hopes to expand in the coming year:

In an effort to help the Mayor’s Fund ongoing support for the victims of the East Harlem explosion and building collapse, Founders Entertainment made a seed donation of $10,000 and encouraged patrons of the festival to donate via the Mayor’s Fund website at www.nyc.gov/fund.

Founders Entertainment promoted local hiring for its cleaning company, Clean Vibes, and other festival positions by working with Union Settlement and Jobs Plus, a training and jobs placement program based in NYC Housing Authority developments, specifically Jefferson Houses in East Harlem and Millbrook Houses in the South Bronx. All together it hired over 100 community members.  The event  also sponsored a college internship program for “on the job training” in the areas of artist relations, security and logistical support for the event.

At the festival itself, two local social service organizations, Union Settlement and Hot Bread Kitchen, were given each a booth at the free of charge where they could distribute their literature, sell products and showcase their mission and services to thousands of concertgoers.

Founders Entertainment organized a successful field trip to Governors Ball for 15 teenagers from the East Harlem Union Settlement. The trip provided them with an insider’s view of the music industry and concert promotion and allowed them to learn about and observe the professional opportunities associated with both.

Founders Entertainment supported and partnered with Hot Bread Kitchen, a local social enterprise that provides workforce development for low-income minority women, by making them the preferred bread vendor at the event.

The Randall’s Island Park Alliance, Inc. (RIPA) is a 501(c)(3) non-profit organization that works with the City of New York and local communities to provide an innovative and exciting destination through a wide range of sports venues, cultural events and environmental exploration. As the dedicated steward of Randall’s Island Park, the Alliance sustains, maintains, develops and programs the Park to support the wellbeing of all New Yorkers. You can learn more about RIPA at www.randallsisland.org 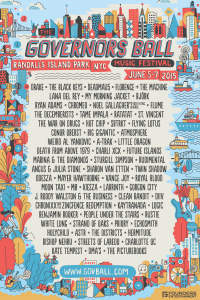