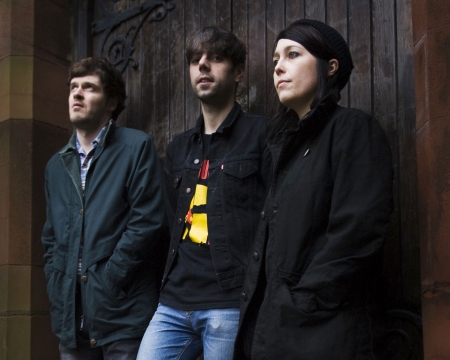 Belfast-based post-punk group Girls Names announce details of their followup to their 2011 release Dead to Me. Their new album is called The New Life, and will be released February 26 on Slumberland Records.

Belfast-based four-piece Girls Names are a singular proposition, both geographically and psychically removed from their contemporaries at home and abroad. Their second album The New Life is the sound of a band on the fringes striving to forge their own path, purposefully out of step – and time – with their surroundings. Weighed heavy with the grey landscapes of their hometown, The New Life is isolation laid bare, shot through with an undeterred sense of purpose and individuality.

“The New Life is not an over night change for Girls Names – just over two years in fact. Dead to Me literally was dead to us by the time it was committed to wax. But it’s a learning curve. We started moving on as artists the moment we finished that recording session, maybe even before. Not to dwell on the past, The New Life is what happens when you reset everything back to zero and start again, but try to perfect. It starts back at zero the minute the needle hits the groove but we’re also starting back from zero once the needle lifts at the end of the record. Ad infinitum. The New Life is what follows now.”

The album’s title track, and the first single to be taken from the album, is an ideal entry point. Just shy of 8 minutes long, it rotates around a hypnotic bass line, and in Cully’s evocation of renaissance, offers a perfect metaphor for the album as a whole. New single ‘Hypnotic Regression’ – available to stream today – reflects another side to the record. The reverb-heavy guitars and compelling melody are immediately memorable, but there are signs of experimentation, too; the white squall of the lead break; the uneasiness in the vocal echoes that furnish the verses. As such, The New Life, stands as a brave statement; the mark of the band untying themselves from the past and easing forth into the unknown.

The New Life will be released on February 18th on Tough Love (UK) and February 26th on Slumberland (US).