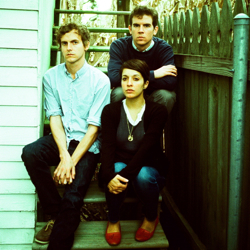 The song “Spinoza” was featured on Generationals’ recently released album, Heza. Now, you can watch the accompanying video for “Spinoza” above. The video was directed by Luther Gooch and shot in the band’s hometown of New Orleans, LA. It was shot entirely on a GoPro camera.

Since releasing their debut full-length Con Law in 2009, Generationals have consistently delivered pop hooks shone through a melancholic prism. 2013’s Heza brings the band to Polyvinyl and along with the label change, comes a subtle but significant sonic shift.

Recorded in phases at Public Hifi in Austin, producer Daniel Black’s Bent Black studio in D.C., and the band’s hometown of New Orleans.

Generationals maintained their obsession with tape recording on 2010’s Trust EP, produced in Austin, TX by freak- folk mastermind Bill Baird (Sunset, Sound Team). Trust saw the band drift away from the Brill Building origins of Con Law in favor of a new wave sound that owed more to The Sugarcubes and The Stone Roses than the Ronettes. 2011’s sophomore LP Actor-Caster revealed a band zeroing in on their strong suit: dynamic pop songwriting. All ten of its taut, bright songs found their way into the band’s setlists as they hit their stride with a live confidence earned by relentless touring.

* w/ Sallie Ford & The Sound Outside