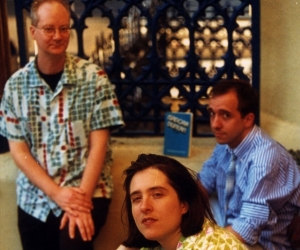 As the release date for the new Future Bible Heroes album Partygoing as well as the compilation of their original catalog Memories of Love, Eternal Youth, and Partygoing. draws near, we commissioned a video chat with Claudia, Stephin and Chris.

Future Bible Heroes is one of the musical projects from the Magnetic Fields’ Stephin Merritt, who writes all the melodies and lyrics for the band. His longtime friend and collaborator Christopher Ewen composes the instrumental backing tracks. Joining Merritt on lead vocals is the Magnetic Fields’ Claudia Gonson. Directed by JL Aronson and featuring photographs old and new by Kimberly Butler, Gail O’Hara, and David Farre’, the video shows the band just hanging out and talking about the old days as well as the new.

Watch “Catching up with Future Bible Heroes” now at YouTube

Partygoing features a number of songs that meditate upon both the good and bad sides of parties: there’s the fun, and then there’s the morning after. Running themes for this album are drinking, dancing, and death. Memories of Love, Eternal Youth and Partygoing. marks the first time the entire original Future Bible Heroes catalog has been available in one place. In addition to the three full-length albums, the CD collection includes a fourth disc that compiles the band’s three EPs—The Lonely Robot, I’m Lonely (And I Love It), and Lonely Days—plus several tracks from outside compilations, including a song from the soundtrack to the film Welcome to the Dollhouse and the band’s hilarious gender-bending rendition of “Don’t You Want Me?” from a tribute album to the Human League. The LP collection includes each of the three albums (Memories of Love, Eternal Youth, and Partygoing) on vinyl plus a download card containing all of the EP and compilation tracks as well as digital versions of the full-lengths.

Future Bible Heroes (sans Stephin) will perform June 12 at the Bell House in Brooklyn as part of the Chickfactor summer festival.