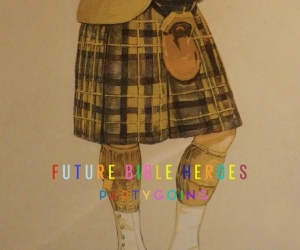 Future Bible Heroes are hitting the road this summer in support of their forthcoming new album, Partygoing. The live ensemble will consist of Claudia Gonson, Shirley Simms, Christopher Ewen and Anthony Kaczynski. These will be their first live dates since 2002.

Future Bible Heroes is one of the musical projects from the Magnetic Fields’ Stephin Merritt, who writes all the melodies and lyrics for the band. His longtime friend and collaborator Christopher Ewen composes the instrumental backing tracks. Joining Merritt on lead vocals for these songs is the Magnetic Fields’ Claudia Gonson.

To support their forthcoming album Partygoing and the re-issue of their back-catalogue on Merge Records (all in stores June 8), Future Bible Heroes will join the Chickfactor Summer Festival in Brooklyn, New York on June 12, followed by eleven US dates in July.

Also, watch “Catching Up with Future Bible Heroes”. Directed by JL Aronson (Danielson: a Family Movie, Last Summer at Coney Island) and featuring photographs old and new by Kimberly Butler and Gail O’Hara, the video shows the band hanging out and talking about the old days as well as the new.