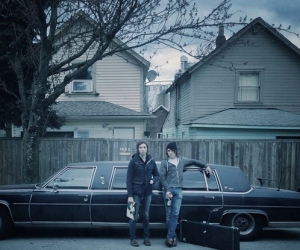 When asking experimental electronic yacht duo Fur Trade to pinpoint where their sound comes from, it becomes pretty clear that the list is never ending. With the ultimate goal to make electronic music, but not with the typical electronic sounds – Steve Bays (lead singer for Hot Hot Heat) and Parker Bossley (The Gay Nineties) set out to find a way to do yacht rock with a heavy impact. The Vancouver-based duo recently signed to Last Gang Records and will release their debut LP Don’t Get Heavy on July 23rd.  Fur Trade’s first single Kids These Days one-shot video features a passionate young dancer taking her moves throughout the city street. Check it out above The duo will digitally release the single along with a b-side remix TODAY.

Fur Trade, which consists of Bays on synths and drums and 24-year-old songwriter and session musician Bossley on bass and guitar, combines both members on vocals, often singing together, to create a unique voice entirely their own. But the intricate sounds you hear on their album definitely didn’t come overnight.

“We usually write songs quickly. Kids These Days was done in one night. We can write a song in one session, but then we’ll go back to the studio and take it down the ‘rabbit hole’,” explains Bays. The self-defined “rabbit hole” method, involves the two locking themselves in Bays’ studio, Tugboat Pl., for days, sometimes weeks at a time to get the ‘sculpting’ just right. Bays has been recording and mixing albums for bands there for the past five years and insists, “with electronic music, the mixing is just as important as the song writing.  You can’t take that for granted.”

The two share a sporadic and high-energy creative connection that allows them to combine, shape and reform their influences, styles and musical ideas into a unified one.  Bossley cites the loose and experimental psychedelic arrangements of 70‘s composer Piero Piccioni, as well as the thick funk lines of Rick James and Bootsy Collins as his main influences on the album.

Tracklisting for Don’t Get Heavy