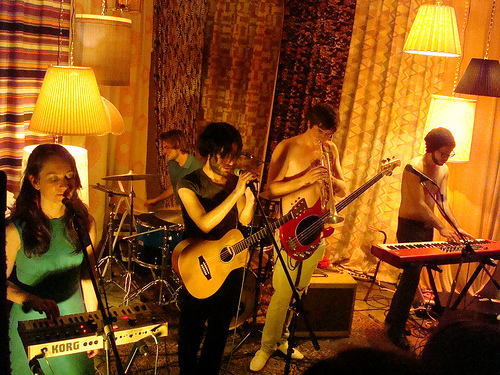 Los Angeles band, Fol Chen, will release their third album, The False Alarms, on March 19 via Asthmatic Kitty Records. Fol Chen will tour North America this spring in support of the release.

Fol Chen makes the soundtrack to a future that never was. To listen is to leave the comfort of nostalgia and land with both feet in a bolder 21st century. The False Alarms continues the band’s electro-pop odyssey with a honed character and a distinct palette of sounds. Fol Chen has also traded its cloak of anonymity for defiant confidence featuring Sinosa Loa as its new front voice.

Since 2009, the Los Angeles-area collective has created their signature sound from field recordings and an electronic junk drawer, building compound beats and sending warped vocal transmissions. Led by producers Samuel Bing and Julian Wass, Fol Chen’s first two records, PART I: John Shade, Your Fortune’s Made (Asthmatic Kitty, 2009) and PART II: The New December (Asthmatic Kitty, 2010), cemented the band’s place as peddlers of dark pop in the alleys of independent music. Their live entity has a wide artistic reach with a propensity for interactive projects like the Tetrafol, a motion-based sound toy developed with musical interface pioneers Monome. Band events have been presented at sites such as the Los Angeles County Museum of Art, the Annenberg Space for Photography, and the Walker Art Center.

The False Alarms is electronic music with rich chords, progressive beats, and addictive melodies. The band calls their genre “Opera House,” a name lifted from Malcolm McLaren but recoined as beat-driven electronica with grand, operatic gestures and lyrically-dense storytelling. The songs, written by Bing and Sinosa, play together as a surreal journey with a human core, created in a year marked by sudden losses of family and friends. Fol Chen builds music with honesty and obsessive precision, and the results are songs that move and are moving. On the dance floor or in the bedroom, The False Alarms is a set of pop symphonies that are chopped, screwed, mangled and beautiful.

Asthmatic Kitty presents The False Alarms: songs of uncertainty, identity, part-time love, loss and mistaken reality. It’s pop music for people who aren’t sure where or when they are, but who know it’s nowhere they’ve been before.